Brenda Eccless s/t (k7, 10trx, crinoide rec 98) - Brenda Eccless open their demotape with an intro shooting as God Is My Co-pilot (especially for the distortion used as destroying ray together with the bass gtr/machinegun), - instrumental intro with a background noise of rabid dogs.. - inside the booklet there's a note about this song which does appeal the plot of a beautiful movie of some years ago, talking about the apocryphe évangiles, - Christopher Walken plays the archangel Gabriel, who had lost the divine grace and he was jealous of the attention of god for that talking monkeys. and then he wanted his revenge.. Anyway, Brenda Eccless' musique is an articulate noise and semi-technical, often screamed at 2 voices, broken by some brief instrumental pauses able to create new atmospheres. When the solo gtr fades in god has forgiven the lucifer's horse and then all together blow up you get really the impression of a great ride (i figure this song from live..).. I guess Crinoide rec is a cool indie label (tied with Halley Rec.), it has produced this demotape with good chrisms, and Andrea (the man behind its production) told me that Brenda Eccless have got a new line-up, some new songs but they are without production. The core of the band spins around warf, jury and roy (?), with two guest drummers. The side b of the tape is harder & faster, with some powerful songs.. what else can i say? They're ok, someone would add mature: send £7000 or ask for their catalogue to andrea volpini - v. s. elena, 3 - 35030 - selvazzano (pd) - italy ----> by yrkomakino@gmail.compao mice

HorsePower - fayetteville (cd, unreleased, 10tx, 99) - 15th march, not a good beginning that morning, woken in a bad mood and a long trip to have, 5 dead cats & 1 dog along the highway.. then i back home, my postman rings the bell and i receive a packet without sender: HorsePower! Fayetteville! Wow! Flashback: if You have read komakino#2 i had written to the mute rec looking for more info about the

Rosa Mota's split up and Their diaspora, - and to my great surprise one day they answer me giving me Sacha Galvagna's email.. The answer came pat.. cool.. i ask him to update me.. ian is in the band with me. michelle lives in new york but is in europe, at the moment, playing with hugh cornwell (singer from the stranglers). justin is also playing drums for him. its paid work.... julie has a child with robin and she is busy with her. she has songs which she wants to record. i am also doing some music with some friends called smartbomb, its very electronic and strange. [Fayetteville] is very different from rosa mota, very quiet. its not on a record label, yet. we are also trying to finance another album at the moment. You have to listen to Fayetteville sitting & cradling Your-self on a rocking chair, ideally just a moment before night & dreams arrive. Close-up dreaming gtrs with a whispered background of drms & bass gtr, under an inmost & friendly atmosphere, - it looks like They give You a steaming cup of tea/coffee to sip while outside it's raining and You swing under Ian's voice, listening to the precious episodes of the trumpet (electric arms & legs' intro..).. Small Towns, 1st trk, is Something deeply lovable, with a singing which wants to introduce You to the semi-smiling observer's mood, sensation re-emerging on death of a man, an instrumental song where in the background you hear yelling children while the theremin floats.. Maybe this is the manifesto of the direction of this Cd, if You are looking for. Diary of a lost girl (where you hear faraway a restrained gtr imploding), el hombre invisible… low-life scum.. thanx xxx. Before Fayetteville They have released Bare Back Ep, mute rec., and Sacha told me it's a cross between what rosa mota were and what horsepower are now.. on the notes inside the cd every one has got a latin name, but here You are the right line-up and The bands in where they were or are..  ian bishop: gtr & vcls - sacha galvagna: gtr & vcls - ted garcia (feline, ultraviolet, unilever): gtr & vcls - mig (moose, moonshake, feline): percussion (but here julian hatfield (early rosa mota, dograck) - robin blick (blowpipe, tortus): wind instruments - dave allen: bass on more songs. www.horsepower45.com                                                -> by yrkomakino@gmail.compao mice

Marlo – rollover (single Cd, 2tx anno 99 self-produced) - exlusive trx (unreleased 3 trx, k7) - I won’t be amazed if a day this indie-rock blood band is famous. Between the various bands Marlo cite i would stop a little on Stone Roses and Suede. On the cd (preceding Instructions in Spontaneous Living E.P) they play a pop music as handbook, especially listening to conserving efforts, where the gtr score gets a distortion which wants to wall up the new-wave like impression You could guess at the 1st listening, and it has a chorus really lovely. Then, everything is really easy to appreciate. The tape, - 3 new songs that Nat tells me to fear They will use just only as a promo to find a label – is faster & rocking, and the voice here reminds in some inflexions Sunny Day Real Estate - but with a different pathos (especially listening to what can you say ) – in addition with Thom Yorke. Leviathan has got a riff semi-melancholic with a crying end which will remain inside my head for a long time.. superultrastereohifi, it’s a pity that neither the cd single and the tape (ok, it’s a promo..) have got a booklet, but it looks like They don’t care/need.. Maybe, but Nat tells me this thing speaking in a low voice.., They’ll be on tour with The Fall.. On the stocks there is a mini-album, called Marlow and I… good luck.. Info: You can find rollover mp3 on www.peoplesound.com/artist/marlo or on www.reelscreen.com (look in the sound gallery)- Email: marlo – 32 bartlett street – wavertree, liverpool, L15 ohw, uk - humnobri@livjm.ac.uk.   Line Up: Nat O’Brien - Lead vcls/Acoustic Gtr - Andy Heywood - Gtrs - Danny Murphy - Bass Gtr - Will McLoughlin - Keyboards/Vcls - Gary ‘THE SMIRK’ - Drums -> by yrkomakino@gmail.compao mice

Pan Pipes - Transmission Form (10 tx, cd, l'angelo carnivoro self production. 99) - Their names is a Burroughs-memory, as they state, - that is the pipes used by humans to get in touch with the aliens, as narrated in Nova Express. Their cd is self-produced by l’angelo carnivoro, and distributed from the italian labels Toast, Lollypop and Sottosopra rec. The first son

g i had wanted to hear has been kill yr idol, guessing it was a sonic youth cover, but it’s only an semi-homonym matter.. then i have read another familiar title: taste of cAndy.. wow – i thought – a jesus & marychain cover!.. ??!! what a stupid, that one was taste of cIndy.. but is it intentional? Well, anyway: they develop a sound split in components maybe too precariously distant between them, trying to tie on different songs electronic, samples, soft pauses/dance tunes, - alternating some atmospheres i have most appreciated as in Yoshi (where a double bass, some percussions and 3 perfect notes of a gtr dance marching in a line..), or as in Radio Flash, even if the mixing on the reciting voice is maybe too far from the original body. An interesting voice, Andrea Tabanelli, signs every song. Metropolis and Child could be a movie score, even if i found the overall cd too often gives the idea it is not yet ready to be released.. a sensation? Last thing: i have got an unique smashing pumpkin song, on a compilation cd called no alternative (and i don’t like too..), then the only one i can remember better: glynis; and well, you and me closing transmission form is almost the same.. well, i don’t think to be wrong.. but.. who knows? Pan Pipes born in the 98, and they have a line-up looking like a tongue twister: taba, bando, tony, toty, pepo, coming from some precedent experiences as Unable, Skinnerdolls, Crackdown and (here i have shivered) Cristina Donà.. On their web site there are available several mp3s and some unreleased songs.. http://stage.vitaminic.it/pan_pipes, mail to: lhvtab@tin.it   – Andrea Tabanelli – v. lume, 30/c – 40020 Bubano (Bo) italy   -> by yrkomakino@gmail.compao mice

Vodka Camels - s/t (6 trx - 99 cd autoprodotto) - The 1st thing You think about when You give Yr first listening to Vodka Camels: early duran duran. That because of several episodes of singer's voice, Chris, and if You like simon & Co. that can be a good beginning, but overall Their music has got another direction, more personal. The first 3 songs are more recent, and relatively brighter than the leaden mood of the latter ones, which have an 80s spirit. 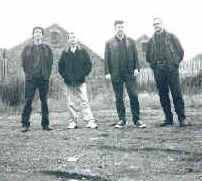 A dragged drum and its percussion give a cool opening to Days of men where the voice has got a better strength and potentiality. Maybe They can look a bit cold, and a background spleen which can not always convict, but maybe it’s a mixing problem. If we were still in the 80s, i’d state they could belong to a sort of romantic rock scene, but with something more. The last track (some violent girls ) is lovely ballad, with sad tones and a chorus You can easily love.. cool.. As cover-art everything is very spartan.. Info: Ian Maxwell – 85 victoria road west – hebburn – tyne & wear – ne31 1uy – england – email: ianmaxwell55@hotmail.com  – http://vodkacamels.iuma.com Line Up: Chris Gainger vcls – Ian Maxwell bs – Terry Anderson gtrs – Greame Mc gtrs – Derek Bird - drms     -> by yrkomakino@gmail.compao mice

ing to take You away longing not to come back.. The Ep, recorded – as They state – in an abandoned country house, extricates it-self on the classic trio gtr/bs/drms, with the addition of some interesting & strange sa

mples and a little farfisa-like pianola. A sound that looks to hide a promising future as melancholic, all pressed between distorted ghosts. Get Tested, the last track in order, is a one way ticket of pure spleen.. [interview taken from komakino #3, papery version] Info: Ro-robot homepage (here several mp3 are available), waandersm@texim.eurodis.com, ro-robot – lansinkstraat 10 – 7481 Jp Haaksbergen – Netherlands   ----> by yrkomakino@gmail.compao mice [read another review]