BryanOrMan - demotape (3tx 1999 self-produced) - Imagine David Bowie with a 4 tracks before he began singing life on mars, then a sort of 'plim plom plam' sunday morning-like by Velvet Underground and a 60s lovesong like retrò taste.. Then imagine certain notes that if pronounced in perfect series must break the heart (never happened?): growing up song, for a blindmans child, the round tail . I worn out this demotape, listening to it i don't know how many times by day, - i'm afraid i can spoil it, or that my cassette player eat it. Bryanorman have a beautiful voice, it takes its roots 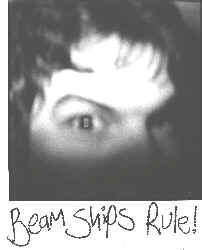 into yr head and U can't forget its resounding cadence, as if it could swing on yr brain. 3 gtr-driven songs, with a delicacy close to be dangerous.. touching in its simplicity.. I put a couple of stupid questions: "who-are-You? J: The Bryanorman line up on the cassette is Me [James] on singing and xylophone and guitar, my friend Barnsey on guitar and xylophone and singing, and a girl called Elizabeth on organ and some singing. K: How many hearts have You broken with these 3 songs? J: I'm not sure whose hearts we've broken, but their are lot's of interviews and reviews with us sprinkled all over the web, some are actually worth reading!... Search for FROG OF DESTINY fanzine for the first one.. (http://kryssss.tripod.com/fod/bryanorman-done.htm)" – James tells me Bryanorman is flowed into another new project called Beam Ships and soon there'll be some news.. Moreover, he plays in some london clubs with a band called Aeronaut/Silvery - Info: james, 8 harvest road, southampton, so53 4hf, uk - beamships@hotmail.com  __by yrkomakino@gmail.comPao Mice

Mother Energy - Big Pig (10 trx, cd P.N.T.S.A. autoprod.) - Sincerely? Frantic. He, Simone, plays every single instrument you can hear: from voice to gtrs, bs, keyb, cello, drms, percussions, signing musics & his crazy lyrics. He gives to the light an own label naming it prodotto non testato sugli animali (that is: product not tested on animals). His voice gave me a strange embarrassment.. what kind of music does he play? Oh god.. it's a soup with metal & melodicmetal ingredients, some heavy gtrs sometimes smothered by soft pauses, 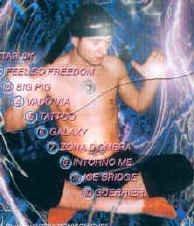 - an italian sung mixed with english, - but the scaring thing more than anything else is the continue use of the pitch effect on the voice.. as example star trek.. A sort of pantera meets guns & roses (brrr!!) and alice in chains' singer.. Maybe i should guess there is a background irony in his purposes, - on the contrary i cannot find the reason.. anyway, very faraway from KomakIno's tastes.. In a couple of songs Clara Donà sings.. technically angelical voice.. Every songs has some lines on the booklet to introduce them [.] To notice the Cd package, among a tetta and a big pig: a picture (i guess) of Simone in yoga position with red slippers.. see above.. Well, as You can read i cannot understand his intentions, anyway he's bravo if You look his work under a technical point of view.. but what is or what can arrive/mean technique in the music without the shining ?.. Neuro: Simone Cossignani - v. Giuseppe Verdi, 15 - 61020 - Gallo (pesaro/urbino) - mother_energy@libero.it

Some Men - Come Tomorrow Come (cd single, 3tx, temper scent rec 1998) - What a name. Well, a little generic, and surely it's not simple catching info about Them on the web, as if i would want search for The Names. Anyway, - from Birmingham, Some Men are not so simple to describe. Let's begin saying that i like Them, and i see Them as if They were ready to start on some undefined starting point. Well, they look like they have a good potentiality to envelope, - for example let's talk about bombshell, - it's a good song with a cool sung, quasi-clash like, with a bass always leading, soiled with a chorus effect, assisted by a gtr resound on a delay. The title track gives the impression to have been performanced on a stage in the middle of a desert land, where minimalistic sounds spacing all around, - this song has got a spirit more deeply rooted in new wave music, and it looks like a discreet visiting card, that maybe needs some confirmations. Maybe they should need another gtr, or, better, a more wicked attitude on the bombshell direction. Soon a site will be on line with several birmingham bands, (http://www.newbrummusic.fsnet.co.uk/, newbrummusic@talk21.com ), and Some Men will feature with some mp3, worth to be heard. Waiting for their next épreuve. Info: tom bradshaw – 89 burford road – kingstanding – birmingham – b44 8ed - england __ bye yrkomakino@gmail.compaolo mice

Crush 22 - I feel to envy Crush 22 Their pop vein frailty. From gainesville, florida, They shine like a flame as beautiful as frail, ethereal and delicate, They shine under a particular light, drawing  or awakening dancing shadows into listeners' head. At the lyrics Estelle (keyb), whose dreamy voice recalls a soul lost between Stereolab and My Bloody Valentine,

- together with Mario (i guess), (he plays gtr too) who seems to be a weak/intangible entity, + Josh (drms) and Roy (bs). They released only wrapped around, an oneiric fly into space abysses, edited on a vinyl,  yearbook comp., on claire de leon rec. This trk as other 5 songs are mp3, available for free on www.mp3.com. These feelings looks like a french pop version of love will tear us a part; and if it wasn’t for this holds inside its-self a winter impression. Keyboards style have an 80s/new wave taste (unsatisfied), and everything is deeply lovable. As i can read, Crush 22 had a brief 7 months life in 98, then They split up, flowing into brittle stars (shelflife rec) [read an interview with Them], le tigre and argentina.  __by yrkomakino@gmail.compao mice

prefer this demotape than the cd, - this because here the sound is more compact & homogenic, breathless, showing a stronger rage, wilder, - i refer for example to the whispers on new medicine. As what regards stereo matters, - well, the only difference is in the circular shape of the cd, as this tape is recorded very very well. For whom don't know yet Ro-robot, well they are a good holland power trio, playing a sort of post punk music here very chaotic. Two singers (gtr & bs) share here cool songs, - and i state again that i'm convinced of the Joy Division influence (despite their disagreement), on bass gtr and vcls. Well, they have some good ideas, and i'm curious to see them live & loud.. Info: RO-roBOT's website (there are some mp3's), waandersm@texim.eurodis.com, ro-robot – lansinkstraat 10 – 7481 Jp Haaksbergen – Netherlands   ----> by yrkomakino@gmail.compao mice

Loomer - World tripped blue (98 - cd, evileye rec) - Their name recalls to some lucky people a My Bloody Valentine's song. Well, anyway i think this san francisco trio doesn't have much in common with Them. But, staring from a song as i don't know what you want from me (my fave one), there the keybs look like they have attended a kiss me kiss me kiss me high school, teacher sir. Robert Smith, lesson

about one more time. Well, if this idea was right, well, nothing to add, - you know, i adore when something (Someone in this case) purely borns from a song i love - otherwise, well, what a chance! Let's add to all this some episodes of a gtr à la Cocteau Twins (when it's not distorted), some drms often electronic, some synth, and a femal voice hanging over an etheric plan. Their music could wear the word shoegazing, - it's so leaden & nocturnal. Maybe an error for Them could be to bet only on the delicate hands of Lynda Mandolyn (voice), or on the unique brightness of Her soul, whose beautiful voice sometimes remembers of a Bilinda Butcher_direction. Well, Hugh Caley (gtr, bass, drums, synths, sequencing) and Serge Vladimiroff (gtr, bass, synths, seqncg), for example, seem to play on i'm coming down just only to give a pretext to Lynda for singing with her dreaming voice. They have only released world tripped blue cd ('98), for the evil eye rec (www.zun.com/evileye), and a cd single (shine, you always shine), but on web there are available for free several mp3 (look on www.mp3.com/loomer). bye yrkomakino@gmail.comPao Mice