Last Green Field - s/t (demok7 - 6tx - 'o1) - Nu-Metal? Hc-Cross? Post-core? Well, Helmet meet Sepultura/Pantera (i know, my core/metal culture is poor, uh?), - probably a devastately (?) live impact, I Say, Break It, - kick ass songs, heavy guitars, quasi tribal percussions, very angry voice (what a pity, the voice is too constantly under special efx). From the dust of Noisebox and Meatfield, - poor Last Green Field! They're italians too! Again as above, nothing new as well as brainwaves/expedients, - but undoubtedly with an excellent shock wave, for jumping higher & stage diving: another Band that, if born at abroad, would have its own tour and less problems. When they're quick i like, - not much the slow parts of Learn. Info: www.lastgreenfield.com.

AA.VV. - Fire Crawl With Me (lp 7tx - 'o1 Bar La Muerte) - Fabrizio Fasolo from D.S.E. send me (merci) this compilation on lp edited by BarLaMuerte rec, Bruno Dorella's ex-Tijuana, - 1st track: Al:freda (already bass player in Larsen), with Madhya Pradesh, a voice speaking deutch, a sickly, ailing dark atmosphere based on xylophone/keyb. Un épreuve for soundtrk? Maybe too short to leave behind a sign. -> Finally i can give a listen to Daniele Brusaschetto, - probably the man that more than anyone else, i guess, has got invested his money in flyers/ads on the italian underground press, - as You read a fanzine/magazine or You receive a packet, be sure, he's there: hmm, well, the missing or the secret member of CCCP [an italian postpunk band of 8o's, now called CSI]? That's his family, as the song's title [a cazzo? - sorry, i don't know how translating this exclamation] Saliva in Raduno, You know, that kind of declaming theatricalness about the voice, together with some distorted postpunk guitars. That's CCCP fault. -> The D.S.E. with Edel Strasse are pretty good, - dark wave 8os style, good instrumental song with a looped voice into echo. I guess this is the best episode together with the extraneousness of A Tribute To The 2oth Century by [R], a lovely piano riff, 5o's love-song style with the sensation that outside the door the atomic bomb is blowing up. -> The sinister and gloomy Lips Vago's moods are not bad, - minimal dark ambient, - but how can You distinguish from Lava's following track? It's Snake In Assisi - i'm not saying these songs are similar, but that they haven't personality/soul: nice songs, but in ambient music the player risks to stay anonymous. -> The Deep wouldn't be bad if only i can hear what they're playing: techno-noisepunk? - I mean, if this record sounded less lo-fi, probably it would be a good ambient/experimental compilation for mr. Lynch. Info: Bar La Muerte c/o Bruno Dorella Via Gioia 82 - 20125 Milano Italy - http://tijuana.kyuzz.org

Proteus 911 - Sinfonie Dal Mondo Delle Cose Perse (cdr 5tx - 'o1 Hungry Rec.) - I'd say they're too much soporiferous, - on the letter i received together with this cd from Free Agency, i read 'post-rock/dark, experimental', but i don't think so, - They simply play some music without voice, nocturnal moods, precariously too similar songs - a whispered voice (in italian) on a couple of pieces, technically sufficient, but with low/poor personality, [komakino radar: no shining detected]. - This is just a personal objective opinion, and i know, this is no sense - anyway, they have been selected for Arezzo Wave festival of last july, they have reached the final round of Rock Targato Italia fest -> but You know, that's the same thing i was talking before about Malatja, - so it's not a contrast. They stay anonymous. // info: mp3's on vitaminic.it, proteus911@supereva.it, - Free Agency c/o Luca Assante - v. pagliano, 34 - 8oo55 - Portici (Na) - assantelm@libero.it

Red Vinyl Fur- s/t (cd 3tx - 14'55 - 'o1 Autoprd) - Red Vinyl Fur are 4 sweet melancholic Girls from Manchester, UK - since the first song of this single cd, i recall to my mind some cool '9os Bands as Pale Saints, Veruka Salt: angelical, struggled, sad, walls of guitars and pathos, sensual female vocals (by Alison & Mandy). Unfortunately three songs only, but Zero Point with its shot riffs breaking the other two slow songs could be an indie hit, -> breaking hearts songs, - if You are sad this Music is going to dry up Yr tears (Shattering). On the compilation Do They Knnow It's Xmas these Girls play Ramones' Merry Xmas (I Don't Wanna Fight Tonight. - Get in touch with: http://www.redvinylfur.com - info@redvinylfur.com. 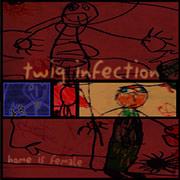 Twig Infection - Home is Female Tomorrow Singular (cd 1o+2tx - 46'o2'' - 'o0 Freeland rec) - This cd has been released in 2ooo by one of the more interesting italian indie Labels, but all these songs have been written in 98-99. Twig Infection, from Sicily, italy, on these songs remind me a Sweep The Leg Johnny live concert, you know, the impact wave, and also because of the jazz-post-rock roots. Ok, this 'post-rock' and by-products is over-inflated, (moreover Francesco from T.I. wrote me about new recordings (of forthcoming release), - He says - on a somewhat different line), and, anyway, i listened also to some mp3's on Their Iuma.com page, as Away When Far Is Not Enough, and on it, You hear a different attitude, kind of Unwound-ish. Well, Twig Infection play really good, they could do even better than this (2 Eyed Man, Frog Jobs For Unemployees), and moreover this cd has got a formidable stereo mixing; - my mind runs, and image to watch Them live in some club, having my drink. So i have to get up, because They start playing Tribeca Dreamin or Fase IV td and i have to move head and legs. This cd is able to create a certain tension in its slowest moments, - jazz fogs, crash and rolling drms, the night and its creatures. Maths guitar, bass (wonderful sound) & drms (affected by tarantism), sax + strange toy instruments. // 3 questions k: Who does listen to the Twig Infection? Who is the ideal listener? Francesco (gtrs, vcls): Beautiful question. Such so beautiful that it doesn't need an anwer. And so be it. k: i saw Yr page on iuma.com, what about? F: We're using Iuma as an appendix for our official website, because it allows us to resolve some tecnique problems (real player stream audio, free space, etc.). The fruits? Some curious americans' email, about a hundred of contacts per month and some download... k: Is Yr music happy or not? F: Our music has got a smiling sense of failure. //// info: twiginfection.iuma.com /// www.twiginfection.com - www.freelandrecords.it - p.o. box 1o6 - 95o3o Gravina di Catania (Ct) - Italy