"That summer was so exciting, 1997, the air in gainesville was full of electricity and everything seemed possible". That's how Bri 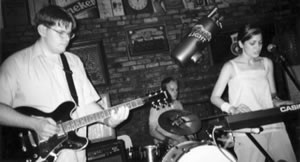 ttle Stars' bio begins, and that brittle is really revealing for this marvellous Band from usa, 3 boys and a delicate girl, between 25 and 27 yrs. I have touched on Them on komakino'zine #4, talking about that brief astral meteor called Crush 22, whose Josh and Estelle were members. The Brittle Stars have a consuming sweetness, a reverence of sensible. Hearing no longer waiting there's to guess U can decide to tear yr heart away and hide It in a safer place. Circus is a quick thought on melancholic notes trying to run away falling on piano and bass guitar's neck. Soft_delicate Estelle's voice has got a remembrance going from the Sundays to Stereolab, and backing to Crush 22, Their music has got still a rare kind explosion à la love will tear us apart (listen to the end of you went in phases), with some keybs of Cure-ish memory. Steve's guitar is pure discretion. Sometimes it is a sort of star dust sparkling on the keyboards (this trip), or else, it drives together with the bass (may) - sometimes distorted/burnt -, followed by the onlyperfectsounds_drums. All songs are not up to 2 minuts, but a couple. For example yr street is dark, a demo song (released on the japanese edition of the cd), - a fantastic pearl in its sonic_semplicity. - Well, i got in touch with Them..

k: what's the last album/cd all You have bought? And did you like it? Dan Sobus (bass gtr): Well, I'm constantly getting new things through Clairecords mailorder, but the last CD I bought with my own money at the store, new, was Plone-For Beginner Piano. And yes, I enjoy it! :) - Josh Ney (drums): I buy lot's of records, sometimes it's hard to remember what the last thing I purchased was.  I think it was the Aislers Set's Last Match, and yes, I like it, not as much as the first one though. Steve Clay (gtr + keyb): I've bought a few since, but the last album I've had a chance to really listen to is by the Flashing Lights on SpinART records, and I really like most of it.  Elliot Smith's Figure 8 was pretty disappointing on 1st listen, but I might've been in an off mood.  I haven't given it another chance yet. Estelle Baruch (vcls + keyb): the last cd i ac

tually bought was Glin Glo (Bjork's jazz contribution with trio Guomundar Ingolfssonar). My favorite song on it is can't help loving that man. k: Can You image a person listening to a brittle stars' song? Dan: Sometimes I take a moment to think how strange it is to imagine people playing our CD often, or somebody out in California driving around listening to us being played on the radio, or things like that. It's a bit humbling and odd! But not so odd, cos I listen to it all the time myself! (That's okay cos I'm just the bass player so I can enjoy the talents of all my other bandmates!). Josh: Actually, it's surprising to me how many people listen to Brittle Stars' songs.  I walk by my boss' office and sometimes he's listening to us which is kinda unnerving. Steve: Yes.  I put song on mixtapes all the time:)  I'd like to think that I can seperate myself enough from the music enough to appreciate it as a fan.  Putting it on is still a bit of a novelty though, since it is my friends and I..and something we don't really have anymore together. Estelle: The only way i can imagine someone listening to a brittle stars' song is because i catch my sister, shena, playing it sometimes. k: Have You ever seen the muppetshow? If so what was yr fave character? Dan: yes, definitely a favorite of my preteen (and teen?) years. My favorite pair is Beaker and the scientist guy [doc Bunsen Honeydew - paolo's note]. Josh: I grew up watching the muppet show, it was so funny and crazy.  I loved Animal because of his drum

ming style.  Steve sometimes says I drum like him (sloppy too). Steve: I'm afraid I haven't seen it in a long time, but I could play Kermit's The Rainbow Connection :) [x the lovers, x the dreamers and me! - pao's note]. Estelle: when i was little, that was my favorite show.  my whole family used to watch it when we lived in england. best muppet award goes to gonzo the great. k: life without music? Dan: I wouldn't be alive without music. Music *is* my life. Josh: I keep on telling myself that I'm going to have to "grow up" and get out of music soon but I just love it so much and it gives me so much pleasure finding great new records (or old records for that matter) and hearing what great music my friends are coming up with.  I miss the Brittle Stars being an active band! Steve: In high school when I was big into skateboarding maybe, but even then I got a lot out of music, listening to it nearly constantly when I could.  If you took everything musical out of my room, it'd be almost empty - it's kinda pitiful:)  I have a stockpile of mediocre instruments and amps. Estelle: i don't think anyone can live with out music.  it can save you from being thrown into a pit of dispair and then it can throw you into the pit itself.  it's kind of controlling.. k: I have read a book talking about 1000 ways to be happy (most were too stupid..).. do you have any personal method? Dan: Do what you really want to do in life. It's too short to be stuck doing something you are not happy with. take each day like it matters 100%, because it does. That sounds really cliche, but it's so true. That's why I envy Estelle so much! Josh: It's actually a real struggle to be happy.  You have to make a conscious effort to make decisions in life that will make you happy.  I think that's vague enough. Steve: I have some of my happiest times hanging out with my friends, who all have great senses of humor.  We were going to start our own corporation at one point and we've had plans to write a screenplay for years now with all our ides, but of course we're collectively lazy, if not individually. Estelle: i have read about a 1000 articles

on 1000 ways to be happy. i don't know. i read something today actually that was in some cheesy magazine. it said.."pick out everything that is blue in your line of vision. memorize what those things are and where they are.  do it now. now, close your eyes and tell me all the red things you saw. you can't do it because you were only focusing on finding the blue. same in life..focus on other things, things that you're glad you have." k: You know what are You looking for? Dan: In love, I've already found it (my new wife Heather!). In lifelong happiness, again, I'd love to be the owner of a successful record shop. Someday, perhaps! Josh: Uh, happiness. Steve: I wish I did, but there are so many ways of life out there now I know I'll find happiness wherever I go.  My long-term goal is to move to the west coast, possibly near San Fransisco.. Estelle: i'm looking for what everyone else is looking for... plus an affordable piano. k: How will you spent this summer? Dan: working constantly. Josh: Summer band!  My friend Roy (from Crush 22) and I are going to be something band related this summer.  We don't know what the alignment will be right now.  I'd like to play guitar and have my girlfriend play drums but it depends.  Other than that not much, working, going to the springs, swimming, kayaking and playing soccer (or football to the rest of the world) on my team. Steve: Summer so far: Work, hang out with friends, watch the Daily Show or The Simpsons/Futurama (we don't watch much TV, but those ceremoniously), play frisbee out in front if my house, play my Rhodes electric piano, work on songs.  I think the purchase of the monolithic Rhodes piano that takes up the center of my room (I share a house) pretty well marks my Summer 2000.  I'd been looking for one for several years. Estelle: writing and sending songs to the band in florida and exploring california.

I asked to Dan to talk me briefly about his Clairecords, a label/mailorder focusing overall on shoeagaze (My Bloody Valentine are on the top of quotes), featuring interesting bands as Isobella for example, or also right his  soloist project called Clarify, a sort of noise-space pop recorded in his bedroom. Dan: well, we (Heather and I) are planning to take it as far as it will go. It would be my ultimate goal to make my living doing the label and mailorder. The label's goal is to release as much music by the bands we love as we possibly can. As it always has been.

-k-- I asked Them if They will ever come downhere in italy for a gig, and everyone answered me not to rule it out completely, but problems are always the self same for every band, that is, $$$.