Interview with Guy Picciotto of fugazi

Nikkozz: You've recorded a lot of albums. What are you sayin' to people now, what is the message and what has changed in time compared to your first things? F: We really look at the albums as kind of like chapters in a book or like installments that document where we are at specific moments in our trajectory. We've never really thought of what we do as the delivering of specific messages that are divorced from the music - ultimately the songs themselves are the messages, so at this point we have alot of messages, i guess. Over time we have got to know each other better musically speaking, as well as having 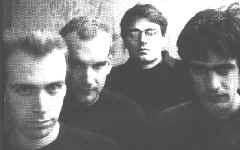 gotten more confident in the studio so i feel like our records get looser and more spontaneous as we go along. We hope to start work on a new record early next year, just adding another chapter.

Nikkozz: Can you tell us something about the Whashington D.C. scene? What about "Dischord" and "Slowdime"? What is the relationship between them? What are you producing now? F: The D.C. scene is like anywhere else in that it has gone through many changes with many different bands forming and breaking up in almost seasonal cycles. Right now there are alot of interesting things going on though not all of them are necessarily linked specifically Dischord. often Dischord has supportive relations with some of these other bands and labels , for example helping them distribute their records or lending them money to manufacture. that is the kind of relationship that goes on between Dischord and Slowdime - its a symbiotic, mutually respectful thing with both sides working together to get the music out there. One of the bands i recently produced is called  Quix-o-tic and they   decided to put out their own record with Dischord's help on their own label Ixor Stix. Another new DC label is Tolotta Records which is run by our bassist Joe Lally - the label mainly puts out records by a band called Spirit Caravan. Actually i also have a small label called Peterbilt which has put out a few records here and there - right now we are doing a co-release with Dischord of an old band i was in called One Last Wish from 1986 which should be out near the end of the year.

Nikkozz: What kind of music are you listenin' to? F: listen to all kinds of stuff- it changes all the time. Recently i've been listening to alot of African music that i got turned onto by a friend Andy from the band the Ex from Amsterdam. He played us alot of amazing Ethiopian music from the 60's and 70's that i am really enjoying right now.  Some other stuff i've been digging lately is: Fela Kuti, Deep Lust, the 13th floor elevators, Smog, Quix-o-tic, the Meat Puppets, Wire, and the Modern Lovers.

Nikkozz: Tell us about the movie that you've done recently. F: The film (which is called "Instrument" and is available on video) is basically a collaboration between us and the filmmaker Jem Cohen. he has been friends with the band since it started and had worked with us on various things before (most notably the song "glue man" which was based on a short film he made, as well as the graphics on our last 3 records). from the start of Fugazi, Jem had been filming the group live and offstage and at a certain point it just seemed like all the material he had stockpiled deserved to be somehow consolidated into a proper project so about 4 years ago we got serious about doing just that. the film as it came out is kind of like a collage of a lot of different elements like interviews, live footage, candid "behind the scenes" stuff all kind of edited together into some kind of portrait. it is not in any way supposed to be a summation of all that the band is about, rather it is like a "version", a collection of angles.

Nikkozz: Do you know any Italian groups? If the answer is yes, what do you think about them? F: We aren't really that familiar with that many Italian bands besides the ones that have opened up for us at shows over there. We've played with bands like Uzeda, Assalti Frontali and Bruto Pop and we think those are all pretty incredible groups.

Nikkozz: "Dischord" is an independent label. Low prices vs. entertainment industry? Are you a "half-entertainer" or something like "engagé"? F: Basically all our business policies like our low prices and our commitment to remaining autonomous from the mass media and entertainment industries, those all exist in order to serve our music. We feel in order to be creative we have to have complete freedom, we can't be beholden to people for whom profit is the main underlying basis for their work. this is not necessarily to say that we are "anti-entertainment" necessarily - i am perfectly happy if people are entertained by what we do. but in addition i would say that entertainment is not the sole value of music - i feel it also operates on levels of inspiration, community building, and education.

Nikkozz: In the USA are there places like Forte Prenestino? [It's a squat, - koma's note] Or is the music played just in clubs, colleges etc.?   F:  In the United States there is no real organized squat movement like there is in Italy. the dominant value in American law is private property so the state would not tolerate a place like the Forte Prenestino for one second. In fact i think italy is one of the last places in all of Europe to have such well organized spaces - on our last tour we played @ the Rivolta outside of Venice, the Leon Cavallo in Milan, the CPA in Florence, as well as the Forte - that is a pretty inspirational circuit. In the USA it is basically as you describe - most shows are in clubs or colleges. Occasionally, and most often in our hometown of DC, we are able to play alternative venues, political demonstrations or unused spaces but there is nothing as developed or as long standing as the squat scene in italy which has been enormously supportive of us over the years and to which we feel a lot of gratitude.