''Hey, Komaboy!! How are you? I won't put Uninverso here, but my "amateurs" one I started posting here. This on FRANÇOIS is almost a Fabiozilla part 2..., but this time with no jokes.
I have a few more here now... but my new (and last) short on 35mm won't be here as well though. The ones made to watch on the big screen I'm a little against putting in youtube.
See what you think of them.
Best and happy X-mas and New Year''. - Marcos Debrito.
It's Yann Tiersen's leit motif for Goodbye Lenin! which introduces and closes newest Debrito amatorial's obscure short, - on the way previously opened by His Fabiozilla [read past komanews]: très mélancholique!!!!!!!! lovely as well crude precept..
read less
read more 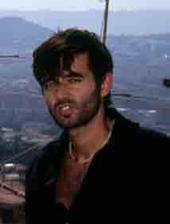