Amps and Kylie, - couple in Music and Life, know how to translate their dreaming imaginery into the finest sweet ethereal dreampop melodies, - with an eye to goth music romanticism and early new-wave. - Sometimes it happens You must look on the other side of the planet to find what You need.

komakino: Routine question, who is Alice Ivy? And who are Friends of Alice Ivy?
Kylie: Alice Ivy and Friends of Alice Ivy are a figment of my imagination... I came up with the concept randomly one day! It has no meaning and no reference points in real life. I often think it is probably a difficult name for people to remember...it isn't a traditional or logical sounding band name really...but I love the name...I love the mystery that surrounds it!

k: Intrusive question: are You a couple in life too?
Kylie: Ha ha, sadly yes! We have been a couple for 18 years...we have been together longer than most married people! I suppose we are like an old married couple in some ways. Unbelievable. Music was our mutual friend and our connection and music keeps us together. Ostia was our first child and Friends of Alice Ivy is our second!

k: What is the difference among writing songs for Ostia and for Friends of Alice Ivy? What is currently your main music project?
Amps: Friends of Alice Ivy came into existence because it has been so difficult to write songs for Ostia. Justin writes 95% of the music for Ostia and I think I needed an outlet to articulate some of my musical feelings. It has transpired that any songs I write now are automatically Friends of Alice Ivy songs... Justin is working on some new music now for Ostia, and Kylie and I will contribute our pieces, but it's really Justin's music. I can't decide which is our 'main' project...I think Ostia will always be the main focus as its been part of our lives for so long...but Friends of Alice Ivy has gone from being a concept or idea and has materialised into this fully functioning band with an identity of its own...who knows...maybe it will grow and take over!! They will always both be very important to us.

k: I always thought that somehow dreampop and shoegaze music came out from the stardust of goth genre, - like the path walked by Cocteau Twins and Cranes; actually lot of Slowdive's early demos were pretty gloomy, - initially these Bands had a very obscure sound, - later, in a certain way, after years, it has bloomed, more shiny, not enough bright to make summer, yet, it turnt multicolour. About You, i feel like the guitars and Kylie's vocals play the dreampop role of the thing, while the aural soundscapes built by synth and sampling is black as shadow. Can you say how your sound is different to 10 years ago? I think maybe You're the coldest thing in Melbourne..
Amps: I think that's a very interesting question! I love all those bands you mentioned and I think it is the fact that they are inherently 'gloomy' sounds is part of their appeal! I think even when Cranes made their "Loved" album it was one of those albums that had a sunnier disposition, but it was still beautiful and melancholy. When I write music for Friends of Alice Ivy now I am often using synths and electronic instruments and I tend to find them slightly cold and lacking in a certain character...until you start writing in minor chords...then the music suddenly takes on a charisma and character that wasn't there before....maybe that's why...those songs that have an unhappy sentiment mean so much more. Look at the Cure...I would rather listen to Faith than Friday I'm in Love!! Ha ha ha.
Kylie: I always think there is something melancholy about both Ostia and Friends of Alice Ivy...even though we had a lot of fun in the studio when we made Hereafter Moth, I felt quite melancholy when I was singing. Some of the songs have a melancholy subject matter to them...it is hard to sing about happy things...if we were good at making music about happy things we would sound like the B-52s...ha ha. 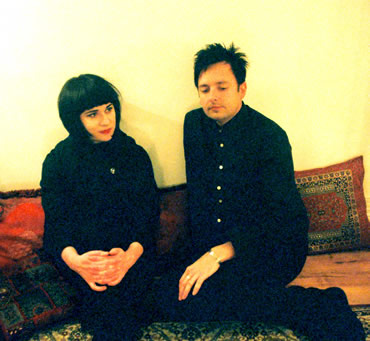 k: How is life in Melbourne for Friends of Alice Ivy? I mean, do/did You have any chance to play gigs? Or is this strictly a bedroom side project?
Amps: Ahhhh. life is wonderful in Melbourne!! It is a great city and there is an amazing indie/underground music scene that is thriving...probably more so than in any other city in Australia. Initially we just wanted to make some songs and see how they sounded...however the response has been so positive that people now want to see us doing our crazy songs live in concert! We have been asked to do some shows recently actually. We are thinking of doing a tour of Australia next year. 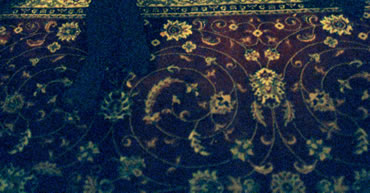 k: How often do You find yourself to listen to your own music? Do You play / produce often Music?
Amps: I think I've listened to Hereafter Moth a lot more than I've ever listened to any Ostia music. Of Ostia's recorded works, I listen to From the Aether fairly regularly...perhaps once ever few months...normally I will put it on if I am very drunk and I want to curl up and get nostalgic!!
Kylie: I listen to Hereafter Moth quite frequently actually...I am very proud of it...when I listen to it I sometimes forget that it is us and I just listen to it for the sheer pleasure of hearing the music. I know that sounds a bit arrogant or whatever, but it's not an ego thing...I just find the songs very beautiful and I enjoy listening to them very much.

k: Do You remember why and when You started playing Music?
Amps: I have always wanted to make records!! Ever since I was a little kid! I remember that I was really into Adam and the Ants and I used to get so excited whenever they had a new single coming out or whatever. I must have thought "I wonder if anyone would ever get excited if I had a record coming out"...ha ha ha. Me and my brother used to put old 7-inch singles in blank covers and do our own record covers and stuff like that. It must be a childhood dream or something.. I think I was one of those kids who used to get out the tennis racket and go beserk in the mirror!

k: Do you want your music to be of its time? Is this the right time for Your music?
Kylie: Because of the influences that have shaped the sound and style of our music it has become a timeless thing. Our inspiration has come from history, literature, mythology, and all that type of thing. So the music seems somewhat irrespective of time to me. There are however some lyrical references to the current dire state of our planet and the trouble she is in...so I suppose those things are of their time. Overall I don't think our music sounds of a particular decade or anything like that... 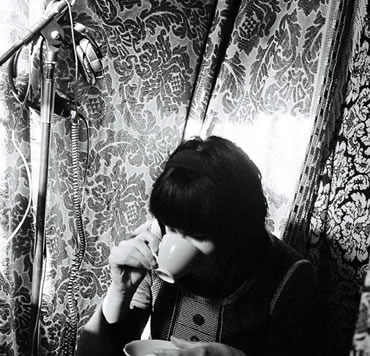 k: Kylie, - what is the relation between Amps' music and your lyrics? Do You write your words after listening to his tunes, or You just pick up your thoughts from a notebook and paste them on it?
Kylie: Interestingly, and unusually, Amps writes the lyrics to our music (and most of Ostia's lyrics too); I think Amps' words and lyrics are achingly beautiful, he is the true poet in this relationship...I feel that my vocal melodies and harmonies contribute towards his writing and lend themselves well to giving the words shape. Even though Amps writes the words, the concepts and ideas for each of the tracks is a collaborative process. The words mean a lot to me and I feel that my humble writing could never compete with what he can create...he is a true wordsmith!!
Amps: The music tends to come first and then I write words that articulate a feeling that I get from the sounds; however we are trying some experimentation with some new songs we are working on where we are going to start with some vocal harmonies and melodies and build the songs up around them...that will be different for us and I am curious to see how it will sound...we might end up sounding like shit like The Black Eyed Peas or something...ha ha ha.

k: Any intention to promote one of EP's songs with a video? I mean, Your Music is truly evocative to me, - a fertile ground for visual imaginery..
Kylie: Definitely yes! I think our music does have a very visual feel to it... I think it lends itself to visuals. Our intention is to make a film score for our songs and use this as a visual part of a performance if we go on tour next year. We have also talked about a short film to accompany Tower of Flints... I think that song is particularly visual!
Amps: We need a film for the audience to watch when we play because we are boring bastards to watch on stage. Whenever we did Ostia gigs I always worried about how bored the audience was... they'd all end up snoring...! Talk about shoe-gazers... we just stood there. 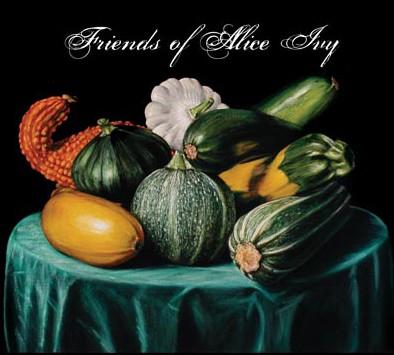 k: '10% OF ROYALTIES ERANED FROM THIS RECORDING WILL BE DONATED TO THE VEGETARIAN NETWORK VICTORIA' , 'still life with zuchinnis' as cover art.. are You try to say something?
Amps: Well... we are both vegetarians and we wanted to do something nice with some of the money... but the cover art is not supposed to make people want to eat zucchinis...ha ha. We should have done a scratch and sniff cover...ha.
Kylie: (Laughing)...ha ha...amazingly we didn't really make the connection between the cover art and the Vegetarian thing...duh!! Ha ha.

k: What do You think we can expect to get first, a new release from Ostia or from FoA?
Amps: That is a very good question! We are not sure...though Kylie thinks that it is highly possible that another Friends of Alice Ivy EP will be released before the next Ostia project due to Justin's university commitments that prevent us from steaming ahead with our Ostia work. We are working on an Ostia project at the moment but it could take ages! If we do a Friends of Alice Ivy tour next year we are going to need some more new songs so it might be good to tour on the back of our next EP.
Kylie: Ostia is a slow-moving beast whilst we work at Friends of Alice Ivy much faster. Justin likes to tweak and tweak Ostia recordings until he is very happy with them... they also take a lot longer because they are more dense and layered... the Friends of Alice Ivy recording process is much easier as it is a lighter sound. We are also happier for other people to produce Friends of Alice Ivy whereas Ostia is an intense, in-house job!!
read less
read more 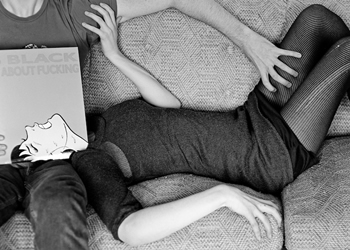