So, I bought this ticket to finally see Slowdive live - single and ever first date downhere in Italy - right after they woud have announced it on twitter. It was fast, my paypal account was ready, so was I, I did not think twice.
Last time I did something like this, in 2008, for the first My Bloody Valentine reunion, because of a rush of anxiety, I bought like 8 tickets instead of 4 (me and friends). This time I've paid more attention. And to my suprise, it did not go sold-out as I thought. What a low cultured country, Italy.
Me and two friends of mine left Rome for Padova, northern Italy, by train, last wednesday; Slowdive was scheduled as (of course) headliners for this interesting festival, named Radar, which sees also Calexico, Lali Puna, The Neutral Milk Hotel and more gold on the plate, within another festival, Radio Sherwood Festival: - this should say something about the concept of niche band, inside another niche scenery in Italy, notwistanding Slowdive have been and still are of huge influence for hundreds of bands and listeners even here. 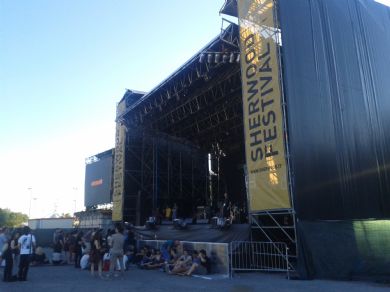 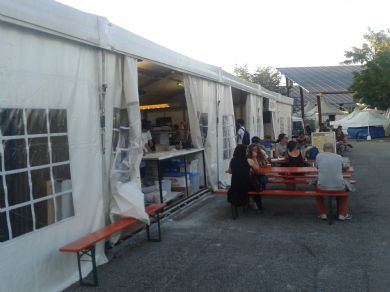 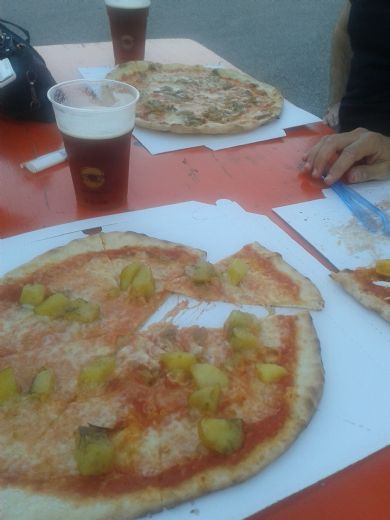 The whole festival looked to be greatly organized, place next to Stadio Euganeo Park Nord. Especially if you're from Rome, then you're calibrated on a mediocre level of quality for these kind of 'big' events: luckly we were in Northern Italy: full of free parking, full of stalls to have a bite, something to drink (a spritz!) without going broke, buy something, have a walk around if you get bored. Kids collecting a number of void glasses from the ground to get a free beer (0,25 /cent each). Let's call it, alcoholism.
And right as I'm having a tasteless pizza margherita with (raw) potatoes (actually, cooked by people attending a course for pizza, for an affordable price, so, peace), 8 o'clock, Brothers in Law start their set on the second stage; I was starving, so I enjoyed (at least, I tried to) my pizza till the last piece, sitted on a bench, and watched their show from far. I already saw these guys in Rome some months ago. They have a good sound, songs wisely crafted and produced, something à la The Drums and Captured Tracks records, plus, they're still so young, - all at their favor, - but, personally, there's still something missing, that kind of shining, or emotive impact I need to fall in love with a band. They make good music (though, I'd love they leave their macbooks home), even original stuff, for being italians, but I did not leave behind my pizza to see them. Still, I am ready to sign a deal to have more bands like them in Italy. 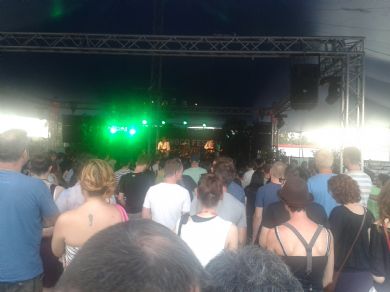 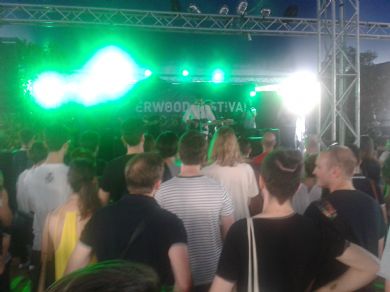 Later it's Be Forest to jump on (the main) stage. This time, as a trio, the guy playing keyboards was replaced by an Apple machine. Damn' robots. Guitarist Nicola Lampredi probably used a secret tunnel connecting the two stages, because right after Brothers in Law finished their set, he was already on the other side of the festival, to join Be Forest (again, he plays in both bands).
I love Be Forest, - that's no news if you read komakino from a while, though, I'm more fonded with their first record than with Heartbeat. And actually, those songs they picked from Cold were the moments I enjoyed the most of their show. And can I say I prefer Erica Terenzi's voice to Costanza Delle Rose's? It's that kind of grave and troubled vocals I love more: Florence, what a fucking brilliant hit. Their short set was fully enjoyable and emotional (the final track, Hideway), even danceable (Captured Heart, Lost Boy, Colours), and, again, I wonder how it is possible that when Erica and Nicola switch instruments, they still have the same guitar style. PS. May I say that, even if you look marvelous dressing red, you should keep a low profile if you're a cameraman cameragirl in front of the stage? Thank you. 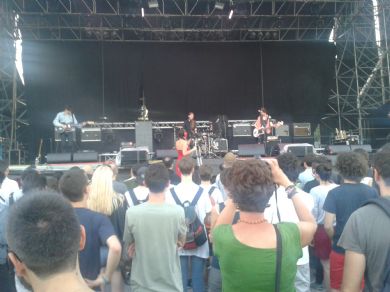 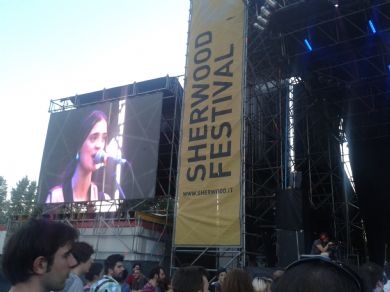 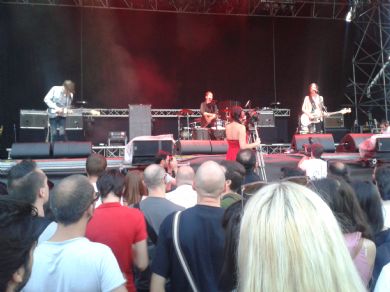 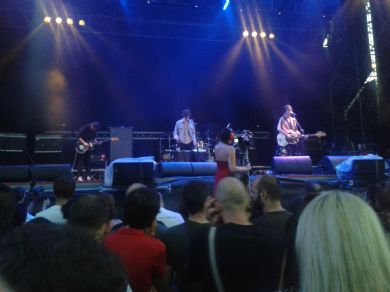 Since I made like 500 kms to see Slowdive, and Soviet Soviet were meant to play their show at the other stage, I just grabbed one more beer and encamped under the main one, waiting for the main act. No hard feelings, Soviet Soviet. 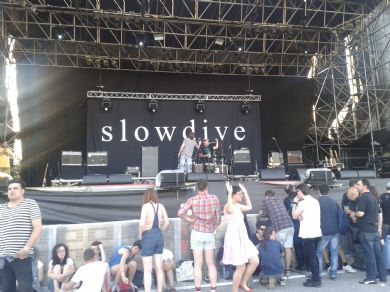 (Underrated music legend) Simon Scott popped up to adjust his drum set, after a short while they were all on stage. Two Jazz Chorus Roland amps for Neil Halstead plus a Telecaster and one Gibson ES 335 (?), one JC Roland too for Rachel Gowsell (plus tambourine and her white Custom 77 guitar), one Vox AC30 (I heard, lent by Jukka Reverberi from Giardini di Mirò) plus Fender Twin Reverb for Christian Savill (playing a beautiful Fender Jaguar and a Strato). An Ampeg for Nick Chaplin? Anyway, in a few seconds, after the Deep Blue Day intro music (by Brian Eno), the homonymous track Slowdive started. Simply celestial. Chatartic and amazingly huge. This song is a simple A+B track, and in its simplicity, it's filled with pure magic. Of delay, reverb, fuzz distortion magic, voices. Rachel was smiling (what a beautiful creature!), - I love when musicians smile for happiness, for being on stage. Then it goes Avalyn. Oh god. I was nearly going to cry like a blue haired girl. But I'm a grown big man, so I spoke a little about footbal, I scratched, then burped. Then they played Catch the breeze, and I could not think of anything more musically poignant in that moment. Still there, maybe Rachel's mic was a little low, especially in comparison with Neil's, - something which sound engineers later fixed.
It follows Crazy For You, this new revamped live version, can't exactly explain why, but I love it more in its original solipsistic way, though, I love how Simon beats the drums on it now. But if they're playing it like this, now, I think, maybe, it was meant to be recorded like that, originally. Maybe. With Machine Gun, I'm in ecstasy. Rachel's voice is thin, sometimes even inaudible, still, you're sure you can hear exactly what she's singing. And then there's that Son of yellow, son of Shiva. Magic.
Blue Skied an' Clear, like for Crazy for You, - it was disarmingly beautiful to hear it live, - but I am like a sort of Slowdive fundamentalist, and I have always thought the whole Pygmalion record should be listened alone, through headphones, in a lonely state. When they proceed with Souvlaki Space Station, people go bananas. Yet, my favorite moments arrived with Morningrise, and She Calls, where Simon Scott and Christian Saville added some real magic. Neil Halstead is for sure an inspired genius with a mesmerising songwriting, but let's not forget Savill(e)'s Eternal: he is part of that cake. At the end of the show me and friend of mine catched a guy from the staff who was taking a picture of Christian's pedalboard: we told him 'share or die'. He's still alive, so here's the picture, hopefully this won't bother Christian (although, I suspect it's Neil's pedalboard, since there is a mix stand above.. can't really say): like a pot of gold at the end of the rainbow, and you can finally give a glance. 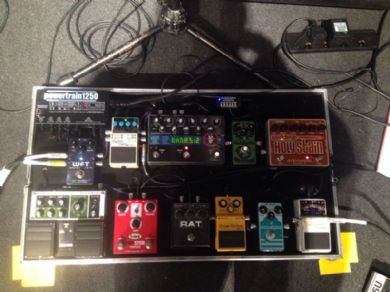 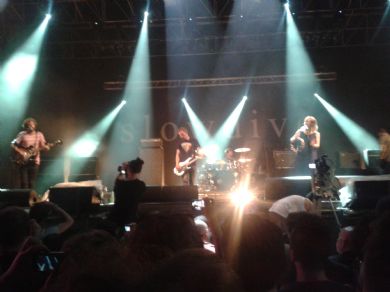 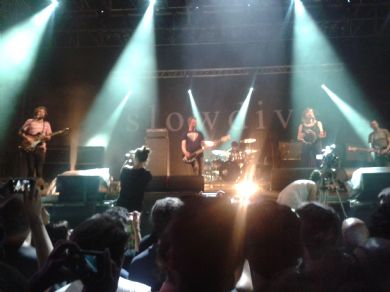 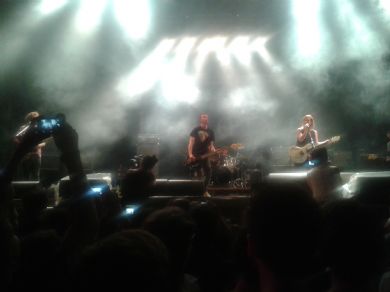 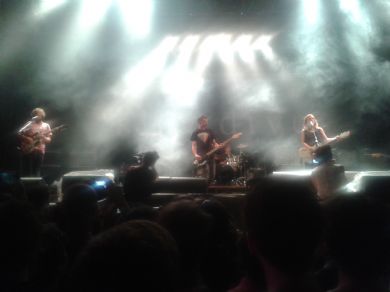 When the Sun hits, oh dear, for so many years I dreamt to be listening to them playing this song live.. so you can hear me howling before it starts.

They closed the show with Golden Hair, announced by Rachel as last song. NO. You'll be back with at least one encore, or maybe ten? Just one, 40 Days. I yelled like a foo 'Primal', but I was sure it could not happen. Golden Hair was fragile and stunning, with several waves of crescendo and placid calm. Call that, shoegaze. Simon gently gave his drumsticks to someone into the audience.
40 Days - sole encore - was mostly fully sing-along with the public. Some screamed 'we love you'. Easy to understand why. I wish I had the time and money to follow Slowdive on tour. What a celestial band. Musical elegy. I'm sure the kids from  Brothers in Law, Be Forest, and Soviet Soviet had a big time there.

Unfortunately, there was no merchandise.

PS. No, I did not bring a camera with me, just my shitty smartphone, so no vids, no good photos, I just wanted to enjoy the show like the old good days. 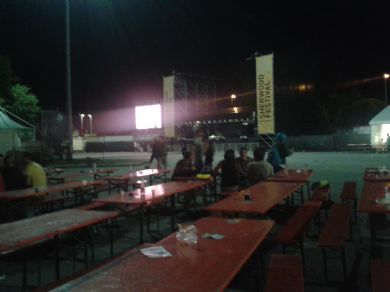 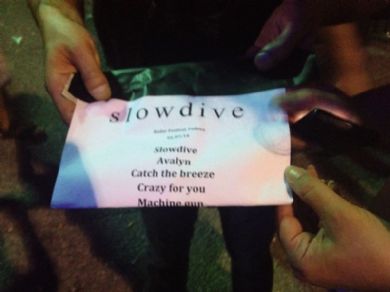 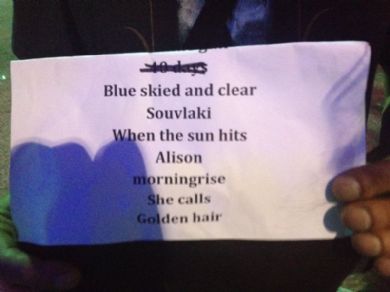 Front picture by Christoph Konzerttagebuch!
Tracklist pic by Esme.
But, a bunch of beautiful pictures - not by me - here, and live vids there.
read less
read more 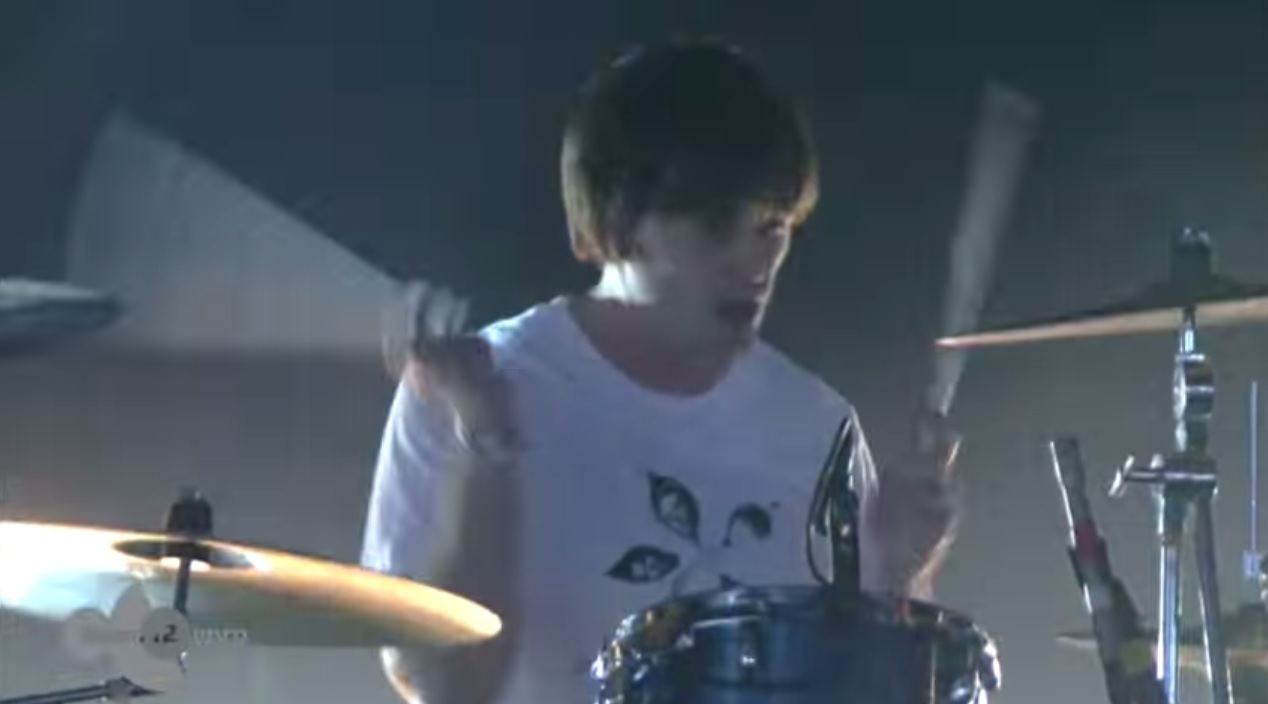 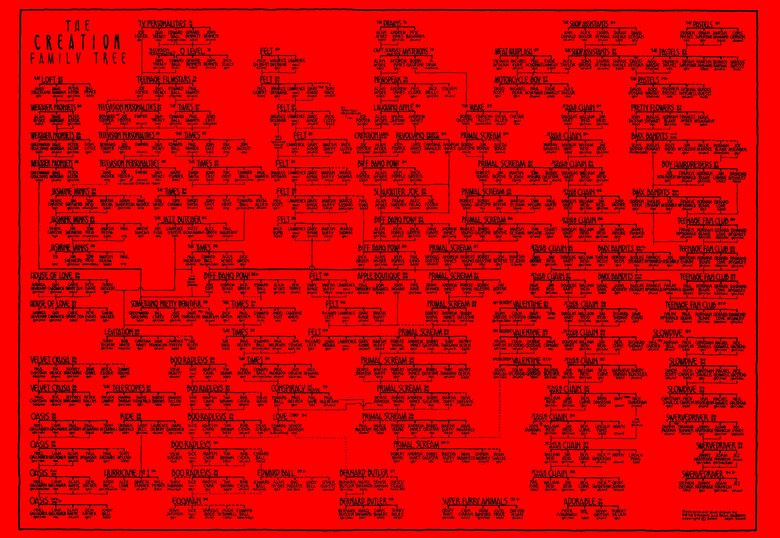