Zulus' debut is something more than 22 minutes length, I like that. Tempus fugit, you know, and, drawing a parallel, usually adrenaline has to be shot and injected quickly. Think Savage Republic's tribalism, post-punk outburst, and maybe Distorted Pony.
Four piece from NY, Brooklyn, these noise addicts never take foot off the fuzz pedals, while Daniel Marten's declaiming vocals are always in a bath of reverb and echo.
So, they flame on Surgery, To Die, - and their selected - somehow more audience-friendly - single Blackout (funny video, kids).
Tremolo is pure epilepsy, with an excellent, ecstatic blooming around the middle of the song. To be played out loud. Not recommended if you have a susceptible neighborhood.
Kisses sounds like the hardcore version of Bauhaus' Hollow Hills: probably just my personal fantasy.
It ends with Death in the current (how differently something alive should eventually end?), their sole four minutes track. Kinda epic in its psychedelic vibe.
That's a good debut record for me. Brilliant and fierce, though, I must say it, the digipack artwork really sucks (white CD, a few notes, horrible cover.. in my personal and useless opinion, of course ;-)).

Music History in Gifs - Turn on the Bright gifs Varie 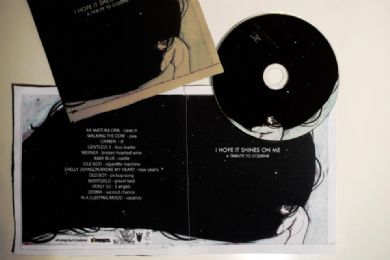 White Birch - A tribute to Codeine Varie
Previously, on komakino fanzine, about 'Zulus':