Monster Movie - s/t Ep (5tx - Clairecords 2oo1) - Some months ago i found a website where there were two emails to get in touch with Christian Savill and Rachel Goswell of Slowdive. That one i sent to Her returns me back, while a lot time after i received an email from Christian announcing His new band, the Monster Movie, just coming to release Their first ep for the fantastic label Clairecords, that one of Dan and Heather Sobus, the same Dan of wonderful Brittle Stars (komakino#5, for the record, They have just released another single, available for free on mp3.com/brittlestars). - Ok, nice people meet nice people, the net is closing in on. - This self_titled cd has got good 5 trx, - but forget the shoegazing/dreampop past also with Them, and get ready for some sonic brit-pop recalls. Reading the interview, the Band (well, They are a duo seeing Christian Savill and Sean Hewson), They're guilty of 'unpretentiousness'. They're kind and nice, and by the way Their version is that this ep is principally a demo done to please first of all them-selves, simply their will to play music, - but but, i personally think this cd has got its own beauty, very inner even if with not too high peaks, - i mean, crash landing and every time i wonder have an own calm/stillness to whistle carefree, enchanted sonorous carpets, between flanger, distorted star guitars, - or also get a listen to street lights, kind of a sad confession before night coming, - all songs with good chorus that You will keep singing into Yr mind.

k: i read on Yr site that Monster Movie came first of Slowdive, what's the story? How was the original sound before this cd?

Sean Hewson: Our biography is slightly misleading. Monster Movie have only been in existence since the beginning of 2000, but Christian & I were in bands together before Slowdive. Monster Movie is the best of those bands, but that is nothing to be proud of.

Christian: Our sound is always changing. The album we are currently doing is very different to the EP we have just released.

k: Who were (or are) the Eternal? I read You Christian used to play also with Them before Slowdive. Sean: The Eternal were our band when we were teenagers in Reading, England. It was Christian & I on guitar & vocals with a couple of our friends as the rhythm section. One single was released on Sarah records - I don't play on that so it's pretty good. Christian's songs are good but the band aren't really up to it. As I remember it got good reviews. We also played a gig in Reading which was a disaster - half an hour of tuning up by four hairy teenagers. Christian joined Slowdive soon after.

Sean:We're English, but we're big fan's of Finnish football. Christian visits Finland regularly and has a lot of friends there. We're currently trying to get the Finnish International footballer Aki Riihilahti to play guitar on our album. There's a link to his site on our site-he's a madman in the best possible way.

k: You know, i think Monster Movie has really few and few sonorities to share with Slowdive, and well, listening to the Mojave 3, i can't say but the same thing (excluding the fact about the voices). It's completly a fresh brand new thing for me, there's not more that kind of dark moods. Is it a clean cut with the past or simply natural? Do You Christian still listen to the Slowdive? Then where is Monster Movie's music from?

Sean: One of the obvious differences would be that Christian didn't write songs for Slowdive. We haven't consciously tried not to sound like Slowdive, in fact we owe a lot to them as regards getting ourselves known. Our sound depends on the song-for this album we're not hiding behind walls of electric guitars as you would expect, we're hiding behind walls of synths & accoustics. We're not artful enough to be influenced directly by other bands, we can't play cover versions and don't know the names of enough effects pedals to copy sounds,we just try to please ourselves which can be difficult.

Christian: I don't ever listen to Slowdive. They are a completely different band and idea. I really enjoyed being in Slowdive, but that is firmly in the past. Monster Movie is still developing, the EP isn't fully representative of what we are doing. The album will be a lot darker than the EP, which was basically a demo.

k: Slowdive split in 95 [am i right?], after the release of Pygmalion, - Rachel, Neil and Ian formed Mojave 3, - what did You (Christian) do all this time? and Nick? Sean: I only know Nick. He's fine, he works for the same company as us, but he's more important. He's too clever to be a musician.

Christian: We have tried to get Nick out of retirement, but he is too devoted to snowboading, mountain biking and other extreme sports. I have been basically slobbing around for 8 years... and it kind of shows. But now I am going to get fit, maybe.

k: do You like Mojave 3's music? Are You still in touch with the other Slowdive's members?

Christian: I haven't heard that much of Mojave3, but what I did hear was pretty good. Not exactly to my personal taste, but Neil is a very gifted songwriter so I wouldn't be surprised if he came out with something pretty special at any time. I don't see them anymore, apart form Nick. k: What's Yr best and worst memory?

Christian: Best memories... Getting signed to Creation, playing in America for the first time, and from a personal point of view meeting my wife Whilst playing in Philadelphia. Worst memories.... alot of waiting around and bad gigs. k: Did You ever come touring in italy? [i hope no!!! i lost too many Bands tour i love!]

Christian: No, we never made it to Italy.

k: so, how is the line-up on the Monster Movie? Who play what?

Sean: Christian & I play and write everything. Christian's the stronger singer so he handles most the lead vocals. The guy who engineered the EP, Martin Nichols, helps us a lot.He tells us when we're out of tune, explains what a note is & fixes our guitars. My wife, Louise, has also helped us out on backing vocals. Hopefully we'll get other people down to the studio to play on our records in the future. k: What's yr stereo is playing in last days guys?

Sean: We're both going to see Yo La Tengo tonight and we like their last two albums. Also Grandaddy & the Supper Furry Animals. 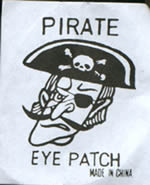 k: You know, the fellows at the clairecords are fantastic! Together with Yr cd they sent me some "sweettarts" (chicks, ducks & bunny shaped candies) and a pirate eye patch! How did You meet with this label? How has been in past with other ones?

Sean: Yes, I'd expect more for $7 than just a Monster Movie CD as well. They've been very good to us, we're not intelligent men and anything that doesn't involve the making of

music we get very confused about, so they've been doing promotion & artwork,trying to sort us out with money, and generally providing the enthusiasm for us that we don't have.

Christian: I contacted them and asked if they wanted to hear a demo, they said OK and then it went from there. We are really happy to be a part of this label as it is run by people who we really like. Although I think they should forget about the 'shoegazing' thing, but that's their decision.

k: Are Monster Movie going to have some gigs?

Sean: There are no plans to tour at the moment as it's impratical with just the two of us. We also have jobs & wives and all our spare time is taken up recording. You play live gigs to promote records,us playing live could only ever promote the idea that we're idiots and that's well known enough already. It's not impossible but it is unlikely. We are recording the album at the moment. It's going very well and should be out in September on Clairecords. 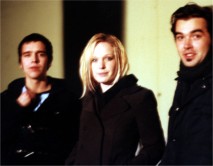