N+A: what can You tell us about Nation Of Ulysses? I: it was a lot of time ago, different age, music. Nikkozz+Aileen: post punk? I: It's not relevant of it all this. N: do you think they left something for the future bands? I: yes, very influential for the new bands. You know about Marshall McLuhan. He talks about people serving technology that they invent - as supposed as technology serving people, and for me music forms around the new technological innovations. One might say that rock and roll, the mother of r' 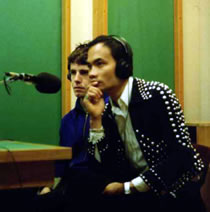 n'r  has really just been the invention of the electric guitar and amplifier. It's electrified music, you know. It's such a broad, non-sense. I guess is basically what it is right for me the invention of the large amplifier made that people resolving the volume, the music was defined by the volume, which makes the industry standard, it becomes standard for the artist, the so-called artist's use, and it's like.. the Beatles for example, those who had an amplifier was invented for them, the superbill  by Vox, it was invented for them to play at shea stadium. That becomes an industry standard, everybody has now a big amplifier, so therefore what you have now is called r'n'r. It's not very interesting, it's an alienated form. For me Nation Of Ulysses falls in a kind of grave. It's fine, our amplification is nice. It must be used moderately. We think to be able to talk to the people. A concert should be allowed communication, should be the  group and the audience, the tour should intertwine luck and marriage. The reason why i refuse the word artist is because artist is a   word that marginalizes the worker, really it's a way that designes the worker. For example the steal worker has security, in the job of a

n artist has no security, no future, no dismiss. The Industry, We work for the music industry, we are workers but we are called artists (entertainment), we are called artists  so we have no security, and no respect. We risk to be put on one side. N: what are you listening now? I: The Outcast record a lot, Stereototal...  i listen to all music, i love all music. All independent underground music - it's really avant guarde, it's really like art, it's art-based, it's about surface, it's about formalism, not about content or communication. It's interested to me. It's weird! Before the war, art was confidetional, communicative, political: surrealism, new dada, futurism etc. After the war expressionism is only concerned with colors. it's an american conspiracy, propaganda, propagating art forms which were all about surface, and ain't that political. And that's what is famous, that's what

r&roll falls  into. You know Marlon Brando, James Dean? The american archetypes.. or Jason Pollock? This is all mythology. It's bullshit, fuck that! N:   Do You mean all the faces of the american actors the middleclass could identify with? I: The middle-class is underneath, it's a myth of America. There is no class conscientiousness, if you go in america you see people who are very poor and people who are very rich- This is because the government is obsessed with race. Races as sex can't never be changed. All this because they never want you to think about power, the real power. It's a very obvious idea.  N: I want some is a collection of 7'' and other things. Why? i: It's a record.. N: just a record? I: it's a good record. Because there are my favorite songs, there are rare singles. It makes sense, a big sense. N: You changed yr sound in yr last album in mass mind. I: It was produced by Royal Trux, so they  have defined the sound. I don't like  the way the voice was recorded, if i can be candid. - So i should rather help my group_ thanx

interview made by Nikkozz+Aileen, 10th june 99, roma, at forte prenestino 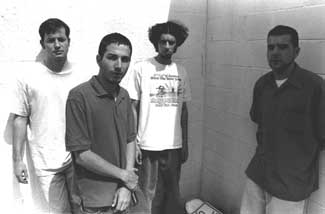