Let's talk again about Dallas, - if You didn't read last komakino's issue, well, They're a Band coming from Estonia, some guys in loved with bossanova-wave pop sonorities, with some Stereolab reminiscence and gtrs Smiths-school.. Their first full-length cd comes out thanx to a canadian label, the Highparks rec, - and it's really a box full of atmospheres and thoughts hanging on  the above mentioned influences - and on Twinky (!), - yes, did you ever watch on tv Richard Donner's movie (the self same director of Superman 1, Kojak and the Get Smart tv series (agent 86 for Control)!!), 1969, with Charles Bronson & Susan George? Well that was a sharp commedy telling about a middle aged writer falled in love with a young crazy school girl). - Let's back to our interview, and let's come to the point..

K: Ok, hello there, who am i talking with?
H: My name is Holger.

K: I know this is not an original question, but i guess it's necessary: Who are the Dallas? Well, i mean, i see that the cd booklet focuses only on two members and there's not written a line-up.. why?
H: We are five-member group from Tallinn, Estonia. We have Kristi (singing), Ivika (keyboard), Tauno (bassing), Allan (drumming), and me, on guitar. There is no special secret about our line-up. But we are classical no-makeup-before-stage-band, bunch of very introvert shoegazers. Kind of bossanova-rock'n'roll-shoegazers. Poets and stuff. That's why there is no names on the cover. We should be underground, you know. What else...since 1994 we have released 3 albums (on cassette only) in Estonia and one so called best-of under High Park Records in Canada.

K: well, i have to admit i know nothing about the local scene in Estonia. But is there one? What kind of bands are popular in Estonia? and what do You think about?
H: So, there is every kind of bands popular in estonia. As You may suspect already, most of them are really bad. Estonian pop generally is for drinking beer, not for listening. But at the moment is very actual so called second wave of our local pop underground and that may grow very strong. I can proudly recommend bands such as Kwing Kungks, who make music that sounds like blended CAN and Sonic Youth in their better days, and new generation shoegazers called Pia Fraus.

K: What's HighPark ?
H: Ask from Grant Goddard, he runs that little label in Toronto we own our fame. Oh, there is another Estonian band under High Park, Una Bomba! They're pioneers of estonian nowadays underground music, many years ago they bring us love to The Smiths and The Fall.

K: what music did You grow with?
H: We grow, at first, with Depeche Mode and local punk scene, then with The Cure, The Smiths, and then came My Bloody Valentine and Stereolab. The last one was and is still one of our biggest influents, besides Backarach, Morricone and great brazilian makers like Edu Lobo and Marcos Valle. Our drummer grow with heavy metal, like most drummers in the music history, and our bass player was punk, but nowadays he looks and talks like Sergio Mendes and his secret passion is Astrud Gilberto.

K: Do You think this is the right time for Dallas' music, or maybe Yr moods belongs to late 6o's? And is the right place?
H: I don't see that our music is full of nostalgia. It is just part of us and we're still young people!! Yes, I think, it's the right time. And the place... who knows?

K: What would You like to change? I know this is a too generic question, but maybe Yr answer can be more explicit/clear..
H: Don't know. Nothing changes if our music doesn't change people happier.

K: Yr dream?
H: I remember, once i saw in my dream that we made our quite old song, Raj Kapoor live with huge symphony orchestra, like Portishead did in their Roseland NYC Live album. That was amazing experience. So, in early spring we're planning new studio session, including this song with arrangemente grande.

K: Yr nightmare?
H: That this studio session will go bad way, we'll split and i'll go back to my regular work to translate comic strips.

K: The best and worst thing You heard to say about a Dallas' concert.
H: The usual worst thing is that "will you ever learn to play your instruments?" I'm immune with that (of course, we're trying...) The best thing was at the concert in NYC, when one lady with very fair face said to Kristi, the singer of not-very-well-known-band Dallas, that she sang like Astrud Gilberto. We all were very flattered. Doesn't happen any day.
HAPPY XMAS AND NEW YEAR TO KOMAKINO!!!

K: oh well, thanx =), but just a last question! "Twinky" song, is that "Twinky"? The  Movie with Charles Bronson? You know, before to have in my hands Yr cd i just thought Dallas' music remembered some moods own of that movie, which is one of  my favorite!

H: Oh, never heard about this movie, i should check out. I didn't even knew what does this word mean (it just sounded right). Couple months ago I saw some weird old newspaper add about american cookies or bagels called "twinkies". That's all  I can say.
Cheers,
Holger 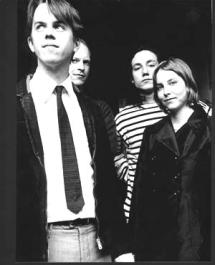 Moonbabies - interview with Ola and Carina  Interview
Previously, on komakino fanzine, about 'Dallas':