"On Dolly's name, Wilmut stated "Dolly is derived from a mammary gland cell and we couldn't think of a more impressive pair of glands than Dolly Parton's". [..]
When Parton was asked whether she minded being an eponym in this way, she joked, "No, there's no such thing as baa-ad publicity.""

"Dolly was born 5 July 1996 to three mothers (one provided the egg, another the DNA and a third carried the cloned embryo to term) [..]  Dolly lived for her entire life at the Roslin Institute in Edinburgh. There she was bred with a Welsh Mountain ram and produced six lambs in total. [..] Autmn of 2001, at the age of five, Dolly developed arthritis and began to walk stiffly, but this was successfully treated with anti-inflammatory  drugs. [..]  February 2003, Dolly was euthanised because she had a progressive lung disease and severe arthritis. [..]"
[> wiki] 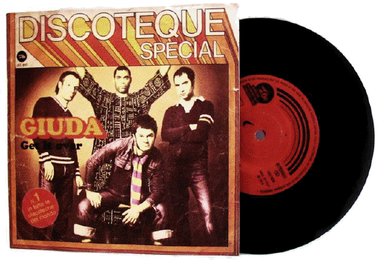 Giuda - Get it Over  Review