Elk City are not only some very inspired musicians, but They seem to be also some funny people. - Last year, in octboer, They have toured italy, - unfortunately not many big towns, - and with my usual bad luck i came across Their Music too late.. However, on the website there's a very amusing tour report.. // Elk City are heroes of a light folk/country, semi-trip_hop rock, using some electronic samplings, - alternated to a fragile 60's taste, a bit à la Maureen Tucker of Velvet Underground in certain episodes, - but concerning sounds/moods and not voice, - the serious bright beautiful one of Renée LoBue (also at bass_station, synths), together with Peter Langland-Hassan (guitar, bass, melodica, accordian, synths), and Ray Ketchem at drums (filters, samples, synths). I could not but falling in love with Their Love's Like a Bomb (mp3, 4,25mb, - dal cd Status), - a romantic after taste, cryptic lyrics (Make bread and take it to your father's grave / Break bread and eat it on your mother's grave), - They even play a cover of famous California Dreamin' (!!!). Languid special Music, but experimental too. - After Status, of 'o0, and some 7", there's been an ep last year, the Sea is Fierce, - and now it's time for a new album, released by WARM Electronic Recordings.

k. well, how do You use to open Your concerts? Elk City: --We like to begin with something that has energy. Sometimes on tour we begin with some improvisations to get the blood flowing. komakino: I read Renee and Ray played together since 1990, and with Peter since 1997: it's a bunch of time! Aren't You tired yet? (i'm ironic) How did You meet? What does the word 'Music' mean for You? Elk City: --We are all very tired. We sleep almost every day. As you may know, ironic people get much more tired than normal people. But rock n roll is all about endurance, and patience. For Peter, the word "music" means, "having fun with your friends, kicking back, taking a mental trip, watching some television." Renee: Yes, Ray and I have played together since 1990, but we haven't tired of it - If anything, it's something that just keeps evolving and holding our interest. For Renee, the word "music" means, "the capacity to immerse oneself in the fantasy that is not ever-present in one's real life". k: If with a camera You could take an imaginary picture of Your music, what we could see? Elk City: Good question. You would see a laughing elf with large yellow hands running for the rainbow! Renee: You would see a garden knome on a skateboard chewing on rose petals with bubbles coming out of its nose. k: well, if what i read is right, i see the Band come from South Dakota and France, - but Elk City (i mean right the town) is in Idaho, isn't it? A nice holiday souvenire? Do You love elks? [ps. i confess I used 'yahoo regional directory' to prepare this question ^_^] Elk City: --Thanks for doing the research. It turns out we are actually all from New York City. But I understand why you thought South Dakota & France . . there are reasons someone might think that. [for example, as i can read written on Their website, between the news, 'January 25, 2002: Press Release: ELK CITY CHOOSES TITLE FOR FORTHCOMING LP New York (filed 3:32 pm): South Dakotan "it" band Elk City today announced', - k's note.. ^_^?] But anyway, Ray is originally from West Virginia where there is also an Elk City. He saw the sign of this town (population of maybe 75 people) and thought it was a nice name. We like the fact that Elk City combines a rural, countryside sort of element (elk) and an urban element (city). And of course, the elk is a wonderful animal. k: You write on the 'dish': "October 27: Somewhere in southern Italy: [..] The Mojo Pin crowd was altogether unprepared for our adventurous brand of rock n' roll. It was the first time in my relatively fortuitous musical career that an entire crowd left as we were playingindeed, as a direct result of our playing." teribble! i would like to ask You 'forgive!!' in name of italian audience... tell me, what song were You playing? Elk Ci 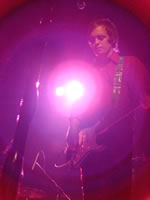 ty: --We were playing the popular drinking song, "What do you do with a drunken sailor?" It was when Ray ran into the crowd shouting, "Shave his belly with a rusty razor!!" that people began to gather their possessions and leave. Renee: At first we thought it was a customary Italian way of cheering a band on, you know, a cool way of replacing the now "faddish" clapping, but after they were out the door for a few minutes, we realized that it was not: A.) customary and they were not B.) coming back. k: well, now i'm curious to know what are Your feeling about italians.. ^_^' Elk City: --We really like italians (at least the ones we've met!). Of course you cannot generalize, but we were treated very well there and are eager to come back. If I may generalize just a little more, I would say that italians have a special blend of self-confidence and kindness. k: i'm curious, what music/bands were You listening to in Your van when You were touring europe? Elk City: --We listend to the Smiths (Hatful of Hollow) a lot on that tour. Also the band Brando, on Talitres records as well. And we listened a lot to Neil Young (Harvest & After the Gold Rush. Also, we had X (Wild Gift and Los Angeles) in the the car. k: can You introduce the forth-coming new album? what's about? Do You have already a favorite song? Elk City: --the next album is called "Hold Tight the Ropes." It's about everything we could think of. We are very happy with how it came out and hope some other people enjoy it as well. 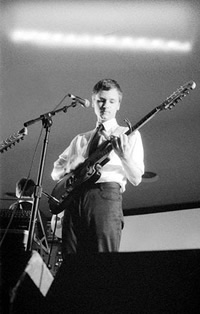