Hopefully that stuff about karma and reincarnation are for real.
'China's penis restaurant - There are several varieties of steamed, roasted and boiled penis at Beijing's quirkiest diner' [..] 'Just before we go, I ask why the girls get off lightly. Why don't they serve any female genitalia? - The boss bursts into giggly, embarrassed laughter. That's a crazy idea - why would anyone want to do that?' [source: timesonline, more pain, here]
read less
read more 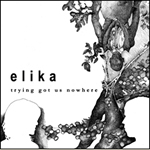 Elika - Trying Got Us Nowhere  Review