komakino. Well, when and where did You meet? When did You decide to form Glorybox? Former experiences in other Bands?

Jan Johansen: I was living in LA working with homeless people and street kids when i started to pick up the guitar. I got involved in a band in LA playing bass, doing covers of sonic youth, smashing pumkins and weezer. This was my first introduction to playing in a loud band, even though this was not my favourite music to play. We would play at local parties but the band ended with the guitarist having a car accident. In the meantime one of my friends from denmark was in colorado and he had just started playing the bass aswell. We met a couple of times while in the states and decided to form a band. At the time we were both really into old school punk and Portishead. We were either going to start a punk band or a trip hop act. We ended up being somewhere inbetween, after fusing both styles. Both of us moved back to Denmark and had various members playing different parts, as i actually started by playing drums and singing for the band. We had one female singer for a while which didn't quite work out until sarah came along and completed the sound we were looking for. She also added alot to the songwriting side of things. Sarah [Hepburn, vcls, guitars & more, k's note] had heard about the band through a friend in Chicago, so she sent us ONE email asking some information, then she sent us another email with her flight details [strong personality!, k's note]. All of us were pretty freaked out since it all happened so fast. Our long time bass player left last year and since then we have been playing with different people and different ideas (including axel from This Beautiful Mess who has been on many tours as our drummer). Oh, did i mention that glorybox has had 11 different drummers, one of them being ben our tour manager who practiced twice, having never played the drums and the next day played two glorybox songs at a festival infront of 1500 people in Poland. [no, You didn't.. ^_^', k's note]

k. (!!!!!) I read You name Your-selves after a song by Portishead, - ever thought to send any record of Yours to Them? What does that song mean for You?

Jan: We have not really thought of sending the record to them, but its a good idea, although we did meet them in LA after a sold out show. They were nice. The song was the first song that me and the bass player jammed together. We actually took the bass line and made our own song out of it which never made it to a recording, but can be heard "occasionally" in a live set. 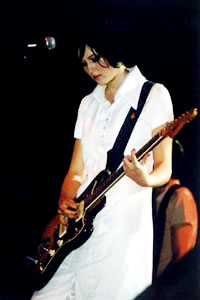 now, passing from Digital Lava to Drive Me To Ohio has been a true surprise; in two years (1999 for Vacuum, and 2oo1 for Pale Blue Light) what's happened? No more 'appetite for distortion' (as i read on your pins ^_^?)? - Anyway i read on Sally40threc about a forthcoming 'return to rock'.

Jan: The ep recording session was one week that was booked originally for starting work on the next full-length. We just decided we were not quite ready yet to start the album so we took the opportunity to try out our other side which we have explored at many festival garages after our main show. This resulted in songwriting in the studio, and experimenting with minimalism. The song honey and lemon was originally intended for the album, but we decided to put it on the e.p. Live the song has a different approach, with more intensity and noise due to using a violin bow on the guitar.
The new album that we are writing now is definately a return to noise, and more upbeat songs. We still have an appetite for distortion.

k. Do You have any image You like to associate Your Music with? - I mean, if You could describe figurately Your Music, - what would You answer?

Jan: this is how a friend described our debut album, and i think it still represents the nerve of glorybox:

glorybox makes music sound like childhood memories, soft and clouded, turning quickly to loud chaotic crashes. From the temperamental noise to the soothing moodiness it covers a whole spectrum of sounds and silences. 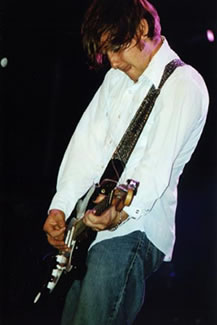 k. What about live shows in Japan? What difference with european audience?

Jan: The live shows in japan were AMAZING. The further south you get in europe the closer you get to that feeling, here in the north people are very reserved and unresponsive. Even though being from the culture you learn to see how they appreciate it anyway, but with the enthusiasm in Japan you really feel a great synergy.

k. How is life in Denmark? is there a good music scene (even for Glorybox?)?

Jan: Life in demark..............? The music scene here is pretty poor. Although a few bands are popping up that have an original expression theres not really a market for it, unless you are ULTRA polished which danish music seems to be, even the indie stuff.


k. Your definition for the word 'Music'?

Jan: making your thoughts into melodies, wrapped in sounds.

k. Most music mags are pointing on two 'doubtful' movements (i say 'doubtful' as their nature/origin, because it stinks of 'mtv'-stuff): nu-metal and new-acoustic. One for kids and one for ..?

Jan: It's easy to categorise and thats what people love to do. In the nu-metal scene the smell is pretty obvious, although there are bands in this scene who are not just in it for the money or have been selected by record companies. Even though this is not our prefered style of music our respect goes out to musicians who don't sell themselves or their songs for easy money. An example of hard earned fame is P.O.D [- arggggghhhhh, k's note] who have been doing this from before Rage Against The Machine could say FUCK YOU. They formed their sound ages before it was popular and have stayed true to it. We had the chance when on tour in America to play one of the same venues as them and met them. They taught us alot about being true to yourself, and this was years before they were big and LOOK at them now !!! We even worked the merchandise table for them !! haha.......

The whole "quiet is the new loud" [see Kings of Convenience, - k's note] scene is as silly as saying "oranges are the new pears". Acousic is NOT new, its the original sound of music. Ever since there was an instrument it was an acoustic one. We like alot of acoustic and folky singer/songwriters and bands, whether old or new. Some examples are Damien Jurado, Nick Drake, Bob Dylan, Neil Halstead and Mojave 3.

k. Can You remember why You choosen to play an instrument?

Jan: wanted to be a rockstar*

Jan: just turn on the radio or MTV these days. It honestly makes me sick to my stomach what passes for music these days. But maybe I am just old and whats really being played on the radio is the new cool thing.

k. What's Your favorite movie? (in case You had one)

Jan: its hard to say ONE favourite movie, but heres a few: the straight story (david lynch), amelie (the new french one), trainspotting, and a new movie thats out right now which is excellent is the Royal Tannenbaums [by Wes Anderson, k's note]. And not to forget the worlds greatest soap opera EVER::::::::twin peaks !!!!!