Strange choice for a name, 'Silverman', - Band coming from Manchester, intimately oriented/guided on melancholic lines/moods, love stories, coloured candles floating on water until They consume. Well, that's been the image i have each time i listen to Their Secret Boy where Anna Dennis' sweet sung reaches highest as fragile apex, - friendly indie Music attitude, sometimes involved over sonorities between Portishead and Low, or on the final track of these seven building [speed of life] part 2, that is Nothing I Do Nothing I Say, - pure delicacy, closed to that Wild Horses of Sundays, wonderful in its lve/loneliness wave/strenght, with Her struggling voice flying over a delicate riff alternated to a guitar carpet. - Together with Martin Williams, They are the core of the Silverman, singing in duet on the opening song Ctrl Alt Del (!!!!, k's note), - and it's just with Martin we have an interview here.. cute boy ^_^. ps. On this cd You find some other audio tracks and video too.

k: well, let's do an experiment: just try to translate Your Music into a brief imaginary situation.. can You? Martin Williams: Our music sounds like the dark before the dawn, where everything is quiet, reflective and possible. Where you are alone with your dreams in the deepest sleep, unconcious and natural, breathing gently. k: bio stuff__ - how do You meet? why did You meet? how old are You? who is the silverman? (a superheroe? - joking..) 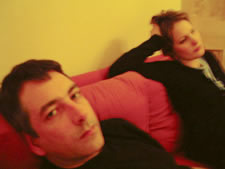 Martin: Anna and I met in a shaft of pure golden light from the heavens, there was thunder and lightening and a big booming voice said....."for you are Silverman". Anna is 24, Martin is 37. Steve, Alan and Paul make up the rest if the band we found them in a contact magazine and they have ages too between mine and Anna's.

k: do You live on Music? Or do You have a job? - You know, i'm always curious to know more about this aspect..

Martin: No we don't live on music yet. Infact it costs us money. Anna is a landscape architect. Martin is unemployable

k: are You involved into any other of art forms besides Music?

k: (great!) - best and worst comment You heard about Your Music..

Martin: Best - someone once said that our music was "A Band-Aid over wounds that still want to bleed." Emotional Red Cross :-) Worst - 'Chicken in the basket' which we presume was meant to be derogatory. Maybe it was a compliment.

Martin: There is no part 1 yet. There are 2 albums Star and Archangel available only through our www.mp3.com/silverman page. We have a plan to collate our favourite songs from these and release them maybe with some new stuff as Speed of Life pt 1 sometime soon.

k: did you already perform some live concert outside UK?

Martin: No. We've never played outside the UK. We'd love to. I guess that will come intime when we get distribution abroad and build our contacts and fanbase. If you know anyone in Italy who would like to give us some dates please let me know :-)

k Probably now million readers of komakino are now asking how/where they can buy/order Your album(s). Please, help Them. Are You expansive?

Martin: Speed of Life pt 2 is available for a low introductory price @ www.opalmusic.com. It's also available on www.amazon.co.uk and through UK retail. There are probably a few other online retailers selling it too. 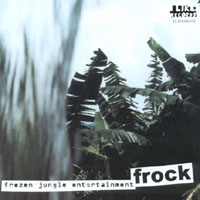