Ofeliadorme is an interesting unsigned Band based in Bologna, Italy, - this is that kind of video (made for their song 6:17) that nearly every band does once in a (band)life-time (and would like to do someday), where You see the band going on tour, having fun in town, making out with grupies (oops, no, not our case, here) - one year of their life together, - nice cut up. Thats a Cappuccino - Actually, it's not. Varie 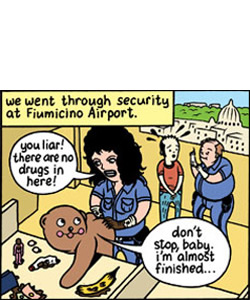