'New Album + Euro Tour in October 2008. We are really happy to let you know that there will be a new Cranes album and a tour in October 2008. The album is going to be called "Cranes" and it will be released in Europe on October 13th. The tour starts in Paris on October 14th and finishes in London on October 29th. We are really looking forward to playing live again. It will be our first tour for three years!' [original blog post here]
In italia:
Oct 21st (Tuesday) - ROMA, Italy - (TBC)
Oct 22nd (Wednesday) - MILANO, Italy - Musicdrome
Oct 23rd (Thursday) - ITALY - (TBC)
Oct 24th (Friday) - CESENA, Italy - Vidia Club
Oct 25th (Saturday) - S.GIORGIO IN BOSCO, (Padova, Veneto) - La Gabbia
read less
read more 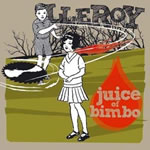 Actually there are other 11 articles tagged 'Cranes' here, check it out!