Note: Mitch Zanich, owner of The Tides Restaurant at the time of shooting, told Hitchcock he could shoot there if the lead male in the film was named after him and Hitch gave him a speaking part in the movie. Hitchcock agreed: Rod Taylor's character was named Mitch Brenner and Mitch Zanich was given a speaking part. After Melanie is attacked by a seagull, Mitch Zanich says can be heard saying to Mitch Brenner "What happened, Mitch?" "- A gull hit her!" "A gull?" [> imdb]

Ps. a quirky note about the Hitchcock's photo on the related wiki page: in the english page is flipped at right, and in the italian one is at left.. that's odd!
read less
read more 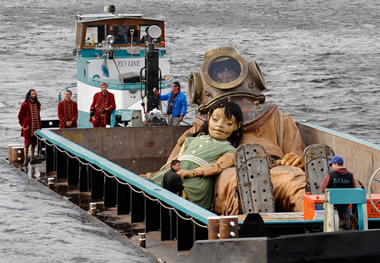