Ok, ieri sera faceva davvero freddo. Yesterday's been a terrible day in Rome, a crazy weather featuring come&go ferocious rain storms and local whirlwinds that turnt upside down the town, and unfortunately made some victims, too.
So, each time our dear Julian Cope, last night live in Rome, used a stormy weather audio sample now and then to play along with His Music, - that was somewhat suitable for the place and time.
Btw, introduced by his roadie with a babelfish translation-like accent in italian 'signòre e signorí - please welcome to the stage, all the way from England, Mr. Julian H. Cope' - as mr. Cope walked on stage, the first things He said after greeting the audience, were right a 'sorry about the weather.. we came back from Sardegna, it was torrential rain too, - England sucks in weather'.. someone from the audience replied him 'it's not your fault!'.
And here we go, the first song, introduced by a 'i think religion is bad, but we all know that, but the new religion is capitalism, so, fuck capitalism', - i can't say the title, - anyway, I Wanna Know What's In It For Me was following.
It's been my first time seeing live Julian Cope, - He looks like attending the same hairdresser school who used to work for those melodic metal videoclips of hairy bands of 80s, - wearing black sunglasses, a vintage german army hat, leather jacket, - naked arms, - a sort of resemblance with Martin Rev, with whom he also shares a funny self-satisfaction-like gesture after each successful performance.
A man with a everlasting yeah on his face.
And the venue was fully crowded for Him, - i didn't expect that He got a such so motley fan base in Rome, young and older people, all very devoted to Him and his pioneer The Teardrop Explodes - so far in time.
He's a funny man, anyway: he didn't remember the (order of) songs he was going to play (ok, who actually does?), so he had a paper with the list attached to the back of his guitars, and here and there he gave it a quick furtive glimpse, and that was somewhat comical, like when You spot someone with his speech written on the palm of a hand; - as well as when he needed to turn off the storm audio sample, and he kept saying to the stage sound engineer he heard it was still on, until he finally realized that 'uh, no, ok, it was the air conditioning'. So funny.
He performed a very long set, with no encores, no breaks, something less than 2 hours, playing electric and acoustic guitar, piano and a keyboard, - always solo, with his amazing voice, able of peaks on Pristine (was Cope or Lou Reed on stage?), Double Vegetation, Sunspots, Why Are We Sleeping?, originally by Soft Machine, Greatness & Perfection, Up-Wards at 45 Degrees, introduced as a song "when people confuse aliens with death" (!), - besides performing songs of The Teardrop Explodes age, when, as he stated, they couldn't play properly, and used sticky tapes to keep hold the keyboard keys and create drones: Sleeping Gas, Books, You Disappear from View, The Great Dominions and more i can't remember now.
A good show, worthy full respect, - although he and his flag waving roadie, both wearing sunglasses at the end of the show, oh god.. 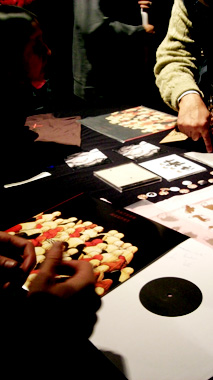 I'm a fan of Father Murphy. I mean, i wrote about Them several times here at komakino, and already saw them a couple of times performing live in Rome.
They played shows in Europe and USA, too, and Their last release and He told Us to turn to the Sun got recently a distribution in Japan. That should means something to You.
They're friendly people and also involved in running one of finest indie labels in Italy, that is, MadCap Collective, next releasing Comaneci's new record You a Lie.
Five songs for their live set, about 40minutes - if i'm not in error, - whose a new one i filmed.
Notwistanding the hall of the venue was still half empty (that means nearly half full), having started at 9 (it's only less than a month that Circolo degli Artisti opted for a new all-shows-start-at-9-PM policy, - so, most of people still ignore that and comes at 10 PM), They've been able to force to the silence the audience, such Their Music was a vehicle for a direct sense of holy and chatartic justice, written on slow unconventional sounds and tuneful rituals.
Boy/girl vocals closer to some choral-style chants than to a pop song refrain, - but be sure that the bishop is not so in line with the catholic block: a sort of subversive indulgence drives We were Colonists into a fuzzy rancid desperate yell, while So now you have to choose between my two black lungs is funereal and powerful.
The new above mentioned song sounds like Swans reading apocryphal books.
So, at the end of both shows, i've been happy to see that Cope's old school fans were pleasantly oriented to buy Father Murphy's records too, - i'd say it's been a succesfull night. And luckly, when i went out, it wasn't running at all. 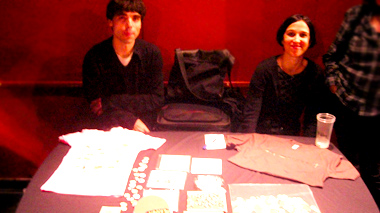 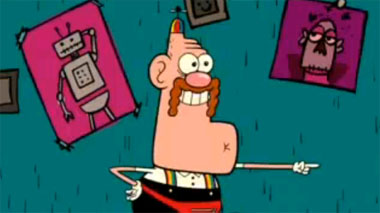