About two years ago i was in Bruxelles for the revival new-wave event A Factory Night (once again) [> see post], - among various things, it featured a gallery of Philippe Carly's amazing snapshots, taken during the golden age of post-punk / new wave / goth rock, and I stood really impressed when i found myself in front of one in particular, - it was a portrait of X-Mal Deutschland's icon singer Anja Huwe. Well, i just got this email from photographer Katja Ruge introducing me Anja's new artistic career, - now She's a (very!) beautiful, elegant mature woman, driving Her creative inspiration into a kaleidoscopic visual world that She describes saying "I paint music. I hear colour. My paintings can be heard with the eyes.", that is Listen to the Pictures.

It is a sort of successful paradox, She passed from the obscurity to the multicolour side, a bath of lights and fragmented lysergic rainbows, - through a sort of Pointillism technique .
A great Artist indeed.

And, also be sure to play this now. 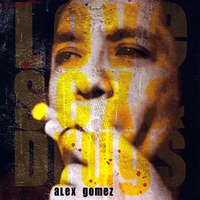