komakino: Do You know that joke.. there is an italian, a girl from hong kong, a canadian and an english man on a plain.. no wait, it is about a band.. so, what's the story with Sunny Day Sets Fire? Or is it all about that London melting pot?
Mauro Remiddi: It's about London's melting pot I guess. I met Onyee because we were working in the same cinema, we were so bored that we started a band even though she couldn't play drums just yet. Then soon after Max came along, which was Onyee's friend...then Ed replayed to a note put on a rehearsal space 'we are looking for a bass player', than we felt we still needed another hand to make the sound ritcher so Matthew came along.
If you live in London is quite common to have friends from all around the world, I guess the way the band met reflects the spirit of the city. komakino: I see You released several 7" before Summer Palace, - can You talk about the evolution of Your music through these releases?
Mauro Remiddi: Well we started as a studio band in a way, we would make recordings adding layers of instruments and so on but live at the beginning we were trully raw with a punk attitude compare to the sound of the first EP.
It took some time before live we could be as good as the recordings. But to be honest with you it was so much fun back than when we were three trying to play like an orchestra.
I think right now playing live with the band is the best reward for so much effort we put into it. 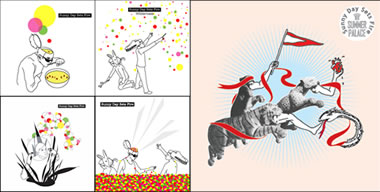 komakino: Summer Palace's cover art is curious.. Any hint about its meaning?
Mauro Remiddi: Onyee is taking care of the cover art, she is makes great graphic using a mixture of computer and hand drawing.
Specially at the beginning I saw the colour of our music being white or orange, I think she did too according to those cover art.
We'll release an EP soon and our sound changed quite a lot, now is even more energetic, I'm curious to know what she would come out with. 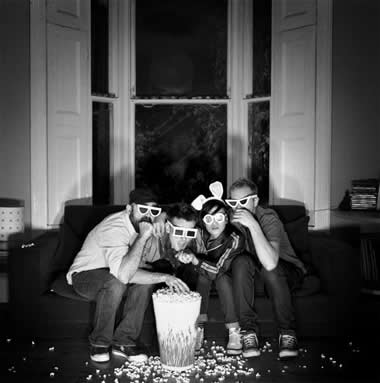 [above photo by Malia]

komakino: Do You feel indie pop? How would You describe Your Music to someone who doesn't listen to the Music?
Mauro Remiddi: We are indie in a way that we take care of what we do directly, there's no record label or exernal force that decide anything.
So we take care of graphic, videos, music production and so on.
I would describe our music Tibetan Metal.

komakino: [i like tibetan metal!] How do You write Your songs? I mean, is there any song that You just started randomly whistling and later You found a proper arrangement for? Do You write songs all together?
Mauro Remiddi: I write the songs and the lyrics, then in studio we arrange them and put all the melodies, and lines that would make our sound the way it is.
The song takes new turns once the five of us had a go with it.

komakino: Is there any someonelse's song You wished You wrote?
Mauro Remiddi: Be My Baby [by The Ronettes, k's note]

komakino: Can You remember the first time You felt You needed to make Music?
Mauro Remiddi: I was 10 and we had a piano at home, I remeber playing it all the time...it was so much fun to watch all the hammers inside the piano moving according to the weight of my fingers.

komakino: I saw a couple of video excerpts from some of your live shows [and that one at Channel M Tv of Manchester, above embedded, was really great!], You all seem to have a really positive attitude in performing on stage, - sort of adrenalized and having big fun..
Mauro Remiddi: That's the thing that bound us together, we have a party on stage...

komakino: Can You suggest us any good best-kept-secret band from your base area You think it would be worthy more exposure?
Mauro Remiddi: With London is rare to have those kind of hidden jems, when something is good tends straight at way to get to the spotlight, there's no a real underground scene...I can mention The Chap they are trully amazing. Like us they are from all around the world.
Two great kind of unknown acts I recentrly discovered are from America, great stuff: Dragging An Ox Through Water and Teengirl Fantasy.

komakino: Do You like reading? If so, what's last book You brought on tour with You?
Mauro Remiddi: In the band we all like reading, with different degrees of course, personally right now I'm reading a book by W.H. Auden and Louis MacNeice called Letters from Iceland. It's an unorthodox travel book, from the mischief and fun of their 'last will and testament' to the Auden's letter to Lord Byron' (which was, of course, already dead).
Ah! I just got a small book of the story of Throbbing Gristle's '20 Jazz Funk Greats'...I love them. What a great title for an industrial album.

komakino: Mauro, You're italian, - so i wonder if Sunny Day Sets Fire got in touch with any italian indie label
Mauro Remiddi: Not really...which is a shame.
We'd love to release our music in Italy but we never focused on it. Yet...

komakino: A couple of years ago You performed live in Sardinia at Here I Stay Festival, - do You have any story to tell about?
Mauro Remiddi: SoOo many stories. Each of us can tell you tones of stories. First, it's one of the best festival ever, small in scale so the good vibes are easy to spot. The bands (the Sardinian ones included) are just unbelivable. There is a great music scene there waiting to be discovered. The Rippers, Golf Club (to mention few names) are Sardinia best export.
Anyway...about the story.
Matthew being so drunk, he was walking looking for a place to faint, this white van was percked in front of him...he first just hit it with his head than he stood there...confused...looking at it, trying to figure out what was that white monster.
It wasn't there before...after 45 sec he gives a go again and the same thing appened boom! His whole body hits the van again. So he walked few steps back...looked at 'the thing'  again and slowly he turned on his left and kept walking...unfortunatly another white van was parcked on that way too...it looked like a flipper and Mat was the ball ahah.
Also...
Walking fast on the beaches because the sand was too hot, chatting with random people at the bar of the festival, falling in love with a cello player. Playing our set acoustic before the gig started...

komakino: So, when are You coming back on tour in Italy?
Mauro Remiddi: We'll be back in Sardinia for set., for one gig only in Guspini.
Hope we'll play more in Italy though!
read less
read more 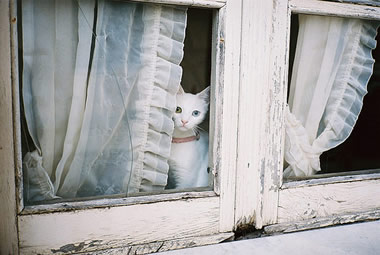 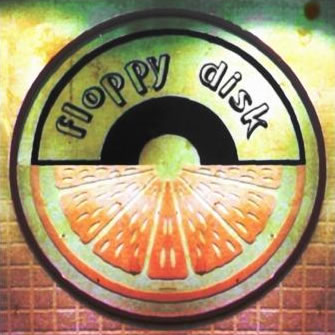