Someone told me that The Wizard of Oz (1939) has particular significance for the gay and lesbian community. By some internet research, i found there are several reason why, like Judy Garland singing Somewhere Over the Rainbow, later related with the rainbow flag, or because of gay slang 'friend of Dorothy', - or simply because of Oz's Dorothy accepting 'of those who are different' just like activist Doroty Parker; - for more details, give a spot to wiki 'Jusy Garland as gay icon', it is pretty interesting.
Btw, that's not the real point of this post, because whatever your sexual orientation is, The Wizard of Oz is still a bizzarre and magic fairytale, originally written by L. Frank Baum.
Personally, until the age of 8, i remember i always confused it with Alice's Adventures in Wonderland and besides that, i remember of being scared to death by green face of witch Margaret Hamilton yelling "I'm melting, I'm melting! What a world, what a world! How could a good little girl like you destroy my perfect wickedness!".
Now, here we are, - artist Graham Rawle made a great work, - He says He never read the book, while He 'knew the film inside-out', - it took Him two years to reinterpretate a personal vision of the wonders of Oz, - homemade, using a doll, christmass decorations, pringles cans, salt and pepper cruets, hand-making cotumes and props, and even more, - He remade the whole emerald town too, - Tim Burton would love His work.
Visit His website, there are a couple of pictures galleries, whose one, a making Oz (oops, a making OD, hahahaah): totally meticulous, impressive work, - sure, his Dorothy is pretty scary, maybe more than the Wicked Witch..
The result: a book, over one hundred of new illustrations, visionary, very inspiring, also including original characters and episodes yet not featured in any movie remake.
I'd say that is simply spectacular. So, well, now buy me a copy of this book, ok?
More of Rawle's quirky wonderful projects in his online catalogue, totally whorty Your time and money.
And last but not least, You should know that Dorothy's original shoes were silver, not red, but it was Technicolor's golden age, my dear.
read less
read more 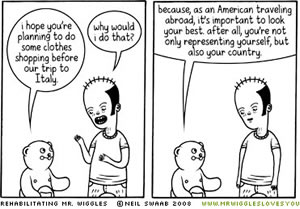 Teenage Fanclub, My Bloody Valentine.. - From Glasgow, with love Varie
More blah blah about 'The Wizard of Oz':

Actually there are other 4 articles tagged 'The Wizard of Oz' here, check it out!