When Parenthetical Girls came last year in Rome, i was there [see  past livereport]. And i'm still happy i was there. And i was even happier last night when They came back, now full line-up (last time Eddy Crichton dropped the european tour for personal reasons). And it's been something between magic, bittersweet (the Music), and funny (Zac's interludes).

There were Kermit, from nothern italy, as supporting band: kind of muscular noise rock, male/female vocals, hard-impact amplifiers and percussive loads, dressing Unsane, Big Black and Einsturzende Neubauten tshirts. Not exactly something impressive to me, maybe a little too flat to tease my attention, although Their sound wave was huge and powerful. Anyway, unfortunately i only saw their last two songs, - hopefully to have another chance soon.

When it came Parenthetical Girls' time to play, we saw singer Zac jumping off stage on the beginning of Four Words (later, before Avenue of Trees started, he admits he underestimated that height), - and went walking away, with a three miles long microphone: it's been like when Gene Wilder suddenly starts dancing in front of the factory gates in Willy Wonka & the Chocolate Factory. The symphonic movements perfectly accompanied Zac's motion / gestuality and infinite-sadness vocals, while Eddy played keyboards as if He lost his contacts lens, - Matt Carlson at drums, and minute beautiful multinstrumentalist Rachael Jensen played keyboards, xylophone and violin. There's been a point when Zac nearly came off the venue with his microphone, such that people started wondered where he was. Actually we were all kind of worried for him when He went off the emergency door. Maybe it's been during I Was the Dancer that Zac spent about 30sec looking for a plactrum in his pockets before the song resumed.
Their live show is something You'd say really communicative: people stayed in silence during each song, - They totally captured our attention, - no time for yawning.
Zac also recommend people to come and see the Dead Science seen they'll play a gig downhere later this month, - something he told at least twice. - I see on the Dead Science's myspace that Zac sings on their Throne of Blood. Well, ok Zac, i'll be there.
Btw, the red lights of init well heat the cold atmosphere feeded by baroquesque and orchestral pop tunes of latest Entanglements and more experimental lyrical rooms from previous Safe as Houses. A balance of musical sensuality and tearing-apart parenthesis.
Like last year, they closed the set with a cover of Orchestral Manoeuvres in the Dark.
At the end of the show (unfortunately, no encores), a thick crowd was around the merchandise banquet, - totally deserved. 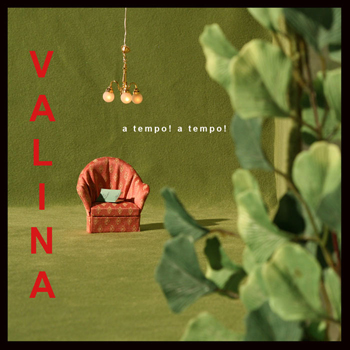 Valina - A tempo! A tempo!  Review