JellyRoll and Tula Storm, rispectively at guitar and organs+keybass, both at vocalists, answer to a few questions posted by email during last days. In case You didn't read yet about the Band on these komapages, well, - The Misteriosos is a special jewel renewing the fuzzy underground motif of 6o's, sharing Their Love for psych garage genre swinging between hypnotic lysergical trips and fast dirty rock&roll immediacy.

komakino: let's start from the very beginning: do You remember Your ever first approach with the Music? and to an instrument?
JellyRoll: First music I remember is my mom spinning early Beatles and Ventures records. Somehow I've never been the same since. When I was young, I sang, played piano, trombone, but nothing stuck till I picked up the guitar.
Tula: I  heard The Beatles "Abbey Road" early on from my father's record collection, and also the soundtrack for Midnight Cowboy. I played piano from a young age, and viola, and sang. I quit everything for about 10 years and then started up in a rock n roll band. 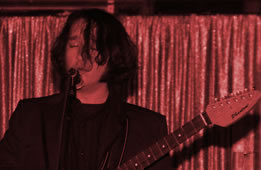 komakino: what's the story behind the Misteriosos? how did You meet? where are You from?
JR and T: We met 5 years ago in a friend's laundry room in Phoneix, Arizona, playing music for what became our previous band, The Hypno-Twists (- song download, - stream audio here). The Misteriosos officially started in Boston in 2003, and then we moved to Philadelphia where we met our drummer, Skeeter. Our first show in Boston was as semi-finalists in The Little Steven Contest - we played the only 2 songs we knew!

komakino: and, you named yourself after some spanish superhero, right?.. like the Zorros? (ok, i'm just joking, but this was a silly question, but it's one of the ones you're expected to ask in an interview with a new Band..)
JR and T: Choosing a band name is one of the biggest pains in the ass in the world.. SO we stole our name from a Thelonious Monk song, only later to realize that Question Mark & the Mysterians released some Spanish records as Question Mark Y Los Misteriosos. Really there is no story.. we just think it's a cool sounding name and somehow fits our music.

komakino: How would you describe the creative atmosphere with the Misteriosos?
JellyRoll: I spend a lot of time in the basement with my guitars writing songs and ideas. Sometimes I go to practice with completed songs, other times I just bring ideas and we work them out together. Sometimes I'll write the music and Tula will write the words. It's different all the time, but it usually starts out in the basement. Everyone in the band pretty much writes their own parts and we work on arrangements as a team.

komakino: do You think Your Music is the key to a happy and successful life? or just to a short period of a  life time?.. that makes me ask You, how do You measure happyness and "success"..
JellyRoll: Music is the only way I know how to live, and there's no way I'd be happy without it. Though there are many degrees of success, at this point I'd be happy being able to do music full time and have our music heard around the world. I'm not really concerned with "hit songs" or fame and stardom. These things seem to kill artists.
Tula: When we are working on a song, I don't think about what will be popular in the current time period..I just think about what sounds best in the song. I believe that music, and other creative endeavors, are the key to a happy life for me. I haven't figured out what success is yet! 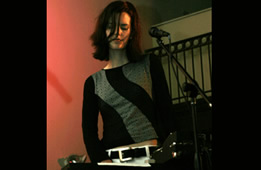 komakino: is there salvation through the Music? How do you go about writing your songs?
JellyRoll: I'm not sure what salvation really means, but it's probably as likely to be achieved through music as anything else!
Tula: Do you mean salvation through OUR music? That would feel like a lofty hope. I know that we put a lot of emotional energy into our music, so I hope that comes across..and for me, it feels spiritual to play music.

komakino: and back to the previous  question ­ what are you guys listening to these days?
JR and T: United States of America, The Brian Jonestown Massacre, Country Joe and The Fish, Velvet Underground, Manu Chau, Buddhist chants and Indian ragas, Love and early Pink Floyd, Soft Explosions from NYC, and another NYC band Headquarters.
JR: I haven't been listening to as much music lately because I spend most of my free time playing and writing.

komakino: i read You settled in NY, - is there a particular Music scene You can feel part of?
JR and T: We actually live in Philly, although we play regularly in NYC and feel more part of that scene than any other. We aren't really trying to fit into a specific scene, but hoping to make our own as we go. That said, there is a great, supportive community of musicians in NYC we have been lucky to be part of.

komakino: i don't know about the former EP (West of Nowhere), but,  listening to Your full-lenght debut album, it seems like the cake is divided in two: Jelly to the vocals for the quicker rock&roll pieces and Tula for the cinematic psychedelic slow-down..
JR: I like to handle the rock n roll songs cause it's easier for me to belt them out over the loud music, but Tula's voice has allowed me to write songs in a style I wouldn't be able to sing myself.

komakino:  Your Music doesn't sound exactly contemporary: it's strongly anchored with a 60's style.. are not You interested in new technology for making Music?
JR: I'm not very interested in new technology for making music. There are some good advancements on pre-existing technology, but I'm not particularly interested in the digitalization of modern music and recording equipment. To me, the best sounding records come from the 60s. I do, however, enjoy new music and new bands, such as New Planet Trampoline, Soft Explosions, The Woggles, The White Stripes, etc. - but my tastes are more towards music with a rawer edge.
Tula: Good question. I also prefer music that is recorded analog and am not really interested in the digital revolution. I think it's interesting that lots of current bands use older equipment in new ways to make their songs current, and this is what I feel us doing - although we are obviously really influenced by the 60s. Bands like The Kills, Devotchka, and The White Stripes stay pretty true to traditional recording techniques and instruments but aren't "retro" bands... these things inspire me. I would not be happy playing strictly retro music, feeling I had to conform to that aesthetic completely.

komakino: did You get in touch with any record label, or, intentionally, You prefer to keep on running everything in a diy attitude?
T and JR: We've done it ourselves since this is our first release. We will deinitely be contacting record labels, but are only interested in deals that allow us complete creative control.

Rosolina Mar - Before and After Dinner  Review
More blah blah about 'The Misteriosos':