TWS are the 3 Cornered Season with a brand new name. "The 3 what?" will say who didn't read komakino's # zero, because otherwise can remember  maybe - a review about Them. Even because right there in Long Island, U.s.a., it seems still a few people know something about Them. Let's say first of all that KomaKino'zine doesn't give exposure to whomever only because foreign & her/his/their music sounds indie-like. Simply sometimes also a unique song can do a band worthy of being mentioned  at least on this fanzine. This case is similar, - the songs are three. The T.W.S. have got sonorities flowing & dragging into the oneiric, gtrs prevalently cleaned with not-distorted Sonic Youth-like explosions plunged into most lysergic and astral things of Motorpsycho, with some new-wave remembrances held by reverberant voices smothered by echoes and minimalist percussions. They're going to have a few hundred 12" records put out in September of the 3 songs from the former demo, and this time each song will have an own name, not only the length. I have talked with Keith, their drummer.

K: James, Rick, and I have been performing in various bands since high school, about 7 years (average age 22 yrs  k's note).. there is not much of a scene for us here so we sometimes find ourselves at a loss to gather local followings. With this in mind it is a difficult task to build a fanbase in Manhattan.. Ideally, we are looking for other bands in the area that have a similar sound that we could book shows with. Sometimes it is very discouraging. It seems like it takes many years for bands like ours to gain acceptance in a largely commercialized music industry. For the last two years we've been sending out free demos to those interested and have received great positive responses. P: You told me the sound of theta wave state has been refined in the last 2 years, - the differences were only under a technical point of view, or what else? K: As with most bands, the overall sound tends to slowly change over time and the more you play with the same guys the more you know what everyone wants to do without even speaking. We did have a vocalist two years ago but things didn't work out, so James and Rick gradually took over this task. Eventually their guitar writing would also be considerate of how they would sing in a particular song. This becomes more of a challenge, so vocal leads in newer material will are traded off due to technicalities of different songs. For the last two years we haven't made many drastic turns in our musical style. P: Why Theta Wave State and not more 3 cornered season? K: This was part of this same two years period. Although we only changed the name recently, the band did not feel comfortable keeping the name when we wanted to feel like a fresh new band. The former name has been commonly mispronounced and misspelled as well.
P: The local North of January rec. is helping You, as You wrote, but didn't U ever try to get in touch with other labels, and if yes, what has it been their reaction? K: we sent out a bunch of tapes to u.s. indie labels but most of them are constantly swamped by piles of demo tapes. We didn't really expect much of a response and we didn't get any. Jason at North of January heard our songs on the website and immediately requested a cd recording of the songs. They're into the music and want to do what they can. This will be our first substantial release so we're all excited. P: I guess You have other songs besides that ones U have put on Your website.. or do You play only any cover songs during Your concerts? K: the three songs from the website were recorded last august at our friend James Nixon's basement studio. He helped us out, so we saved some money on that. We have enough material to record a full length but we'll see how this record goes and then start putting money aside for the future. P: How do You feel when You're playing a song? K: hypnotized. P: Can You see Yr-self & co. if all of U don't play in Theta Wave State? K: I'm not sure how the rest of the band would answer, but I'd be writing some electronic stuff more seriously. I dabble a bit myself, but without real live musicians to interact with it's just not the same thing. P: Can You see in the future Theta Wave State? Is there a future? K: As long as we're here there's nothing else we'd rather be doing. We'd like to do a tour soon, but other factors in our lives will keep that on hold for a little while. So far responses over the internet has been quite positive. As long as we perform enough we should be alright. 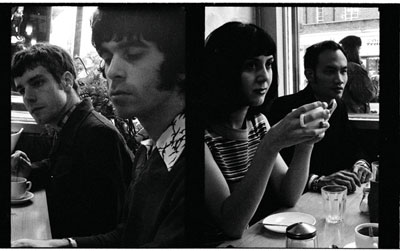 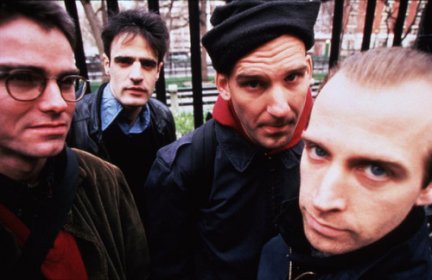