Past month i reviewed Soundpool's release On High, special album similar to a fast space trip through an universe of cascading sounds. Now, Kim Field and John Ceparano (of italian origins!), Soundpool's core, rispectively q-chord and guitars, together at vocals, answer to a few question i emailed Them, - just to know something more.

komakino. You know, it's the old-classic theme.. who are the Soundpool? Any detail from the difference between being Clark Kent and Superman?
kim: clark kent by day.. superman by night...... we have a photo loft space in nyc... aloftnyc.com.. we rent for photo shoots.. i am a set/prop stylist during the day... john co-manages the studio and tinkers around in pro-tools and on my space and sends out cd's for review etc. since we also run aloft records out of our photo loft... hence the name. mark sometimes does sets/props with kim and is also a tech wiz... and designer.. he designed and created soundpools website, myspace, album art etc... he also has a blog site about sharks.. also known as mark the shark... www..com.... james has a day job that requires a suit.. we are fooling around with bass players at the moment... we are all about the band outside of this.. but all of the odd jobs collectively support the music as our ultimate experience.

komakino. Soundpool is the perfect Band name for a song like On High, i can't think of any better, - it's a complete shoegaze sound bath, - and when i first heard this opening track, initially i though "ok, i know what kind of Music i'm going to hear now", but, songs as Moonglow or Eurostar added a special unexpeted 60s space lounge / pop sense to everything, - so my attention stood on, and i've been captured by the beauty of the whole album. Oops, this is not a question.. just pure flattery.. - maybe i can ask: there was a particular guide-idea behind the whole album composition?
john: i think we just evolved in to the sound that ended up being the vibe of the album. we're definitely coming from space lounge... and other 60's influences.. but after putting out two albums under the name "hypschords" which were more on the 60's/80's electro lounge psycho pop bossa side of the spectrum... our sound started to develop more of a hard edge.... the shoegaze was almost unintentional.. and more a side effect of our natural tendencies toward a bigger more rock sound
kim: this really stemmed mostly from playing live... and doing really psychedelic slow songs.. spacey ethereal songs... and feeling like really for live... it would be so much more fun for us & the audience to have more up temp... danceable... guitar driven... wall of sound sort of music. i guess this naturally probably happens to a lot of bands because of the live experience... there's so much energy in a live setting... and to just calmly sway back and forth to a dreamy song... well... you know... 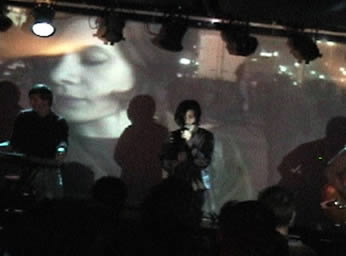 komakino. Where is from Brand New Dawn [currently available only as video]? - It's so poppy 60s (especially because of the pa-pa-pa chorus).. anyway somehow renewed and made 'something fresh'
john: no you're not dreaming... the space element is definitely present... space is a pretty big influence on our sound. and the movement i guess i would take to mean the fact that the chord structures tend not to stay in one place. but take you on a trip via melody, modulation & harmony.
kim: space is life... life is space.. it's all in motion... so naturally...

komakino. i read of Your deal with Itunes store, - as well i also know Your account at myspace (what band doesn't have one today?), and if i'm not wrong, the Band is self-produced, - so, we can state the Soundpool are total  d.i.y., - for choice or necessity? who does manage everything? it is a collective thing?
john: soundpool is totally diy! i would say both by choice and necessity... we are totally self produced and do all of our recordings at our own home studio. we make our videos and visuals... and run aloft records. mark does all web design and packaging. pablo who was playing bass with us a while mastered the cd as well. there is a certain satisfaction from being self produced this way. not to mention the autonomy over our own creative vision. i think with the state of the record industry today it only makes sense to do as much of it yourself as you can. ummm... and also i feel like the listener gets a more pure vision of what the artist is really about and what they're going for.
kim: myspace may be cliche but.. we love it.. we have met so many people... great bands... d.j.s.... writers... promoters.. clubs.. music fans... etc. there is so much good music out there that it's depressing. myspace has literally opened up the world to artists. we can practically thank it for our u.k. tour... we should call it our myspace tour.. because almost everyone who is involved and helping us with it is via myspace.... 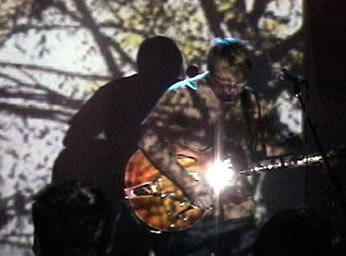 komakino. A couple of videos can help to get more exposure, and You have two (Eurostar and Brand  New Dawn), - does mtv have them?
john: ummmm.... no..... i don't know what mtv is like in europe... but over here it's very homogenized. we haven't actually done a lot to promote our videos as of yet... but we are actually in the process of producing a video for on high with a video artist.. who has plans to really get it out there... this will be the first time that we've collaborated with someone outside the band to do a music video.
kim: we actually have other music videos..just not available to the public... maybe some day we'll release them on a dvd for fun.

komakino. Did You ever hop on a eurostar train? In italy 'eurostar' trains (link) are always in late..
john: actually the footage taken from the inside of the eurostar in our music video was shot by good friends of ours on their honeymoon in italy!
kim: we've never been on the eurostar.... just liked the name.. and idea of it.. metaphorically... and also.. thought.... it a good idea karmically/cosmically to open up the doors of travel for us as a band in europe.
john: yes... we've always wanted to play in europe... ummmm... we feel like we have many influences from over there..
kim: we could end up going over there.. and never coming back to the states.. which become scarier every day....

komakino. I see You have some live shows to come, whose one in London.. is Your first time in Europe? Your sound can be considered more european than american?
john: yes.. it'll be our first time playing in europe.... and we are naturally very excited! we've been getting so much love and support from across the pond. and we feel like our sound may be appreciated more by a european audience.
kim: although new york has an amazing community of artists and music lovers...who have been unbelievably supportive as well. there are really cool things happening in new york musically right now...and in little bits and pieces throughout the country as well..but new york as a real hub.. 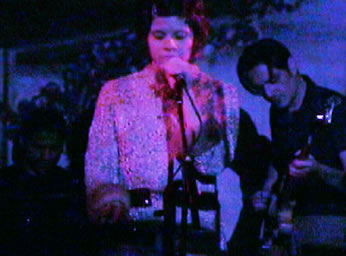 komakino. Who does write the songs?
john: i write pretty much all of the music...and kim & i share lyrical writing. i feel like my role in this project is almost that of writer/producer.
kim: i give all credit to john...he is the most focused & passionate artist. i am mostly here for support and some inspiration.
john: i think it's all about kim as the focal point and the group as a whole...
kim: really?
john: yes... you're the lead singer it's all about your voice and your sincerity and everything else...
kim: it's all because of john.... i would have never been singing and in a band otherwise
john: i think at the end of the day though we are a group and everybody's contribution is essential to the sound of the whole. many times we'll put on marks synth last and it'll be the thing that really makes the track.
kim: we love mark... he's amazing.. he's so much about the sound of this project.
john: we love james too!

komakino.  Is there any movie You would have loved to write a soundtrack for?
kim: john ummm.... there are so many good movies... first thing that pops in to john's mind 2001 a space odyssey.. although i don't think i could do better than the existing track. it's a hard question to answer because so many movies that we love have great soundtracks already. we definitely are very much influenced by great movie composers like henri mancini or enio morrocone.

komakino. So, of course, what are the plans for the next future..

john: of course we are already thinking about another album. but there is still so much to do to promote this one.
kim:   it's so much about now...but secretly...we hope to tour the world... we love playing live... and it would be the ultimate to take that everywhere...
john:  i think for us it's very much about the experience. i feel like we're going to the u.k. mostly for the experience of playing over there. not that there aren't any ambitions attached to the trip... but i almost feel like the ambitions are secondary to the experience. isn't that why we play music in the first place? for the joy and feeling it gives you... and why we create music in the first place? to bring a sound that was in your head in to the world.... and play it for somebody who might appreciate it as much as you do... 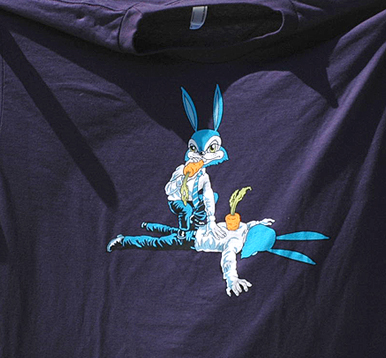