[above picture by Iguana Jo]

oh yes, i feel kind of honored in exchanging a couple of emails with Rudi Protrudi, living legend, - in fuzz we trust, or at least, komakino does. It's unbelievable the Fuzztones are so pretty ignored in usa (read below), and the fact They have a more prominent fanbase in Europe. Well, the latest tribute album 'Illegitimate Spawn', is a good excuse for an interview with Rudi and Lana Loveland, - the Fox on the Fox, the newest (as well as youngest) fuzz-addition, playing Organ.

komakino: so, it's more than a quarter of a century for the Fuzztones (even if the line-up had its various changements), is not yet time to turn into folk music instead of keep on fuzzing, Rudi?

Rudi: And I'm STILL a teenager! I HAVE done a few solo acoustic shows, even some country stuff with my side-band, The Ladykillers, but yeah, you're right, I have no intention to ever stop rockin'.

koma: i'm 28yrs old, i crossed into Your Music about ten years ago after listening to Your version of 'the witch' originally by the Sonics, and was love.. and before writing this interview, i checked at youtube if there was a video, - and i found both Yours than the original 1965 movie trailer for Monster A Go Go,- i watched them for the ever first time.. do You remember anything of the making of the witch video? it's totally not-90s.
Rudi: That's 'cause we made it in '83! Ha! [oops!, komakino's note] That was actually filmed as opposed to videotaped, so it has the grainy look of a 60's B-movie. we filmed it in a small club in NYC. I don't remember the name of the club. Our bass player's brother filemd it, then edited in footage from old horror flicks. If you think that one was good, you gotta see the video he did for "Ward 81"! They are both included on the DVD for "LSD-25", the double CD/DVD set we put out last year on Get Back.

koma: personally i think that the evolution of Your sound, from underground 60s revival to horror garage, to return to a more psychedelic sound, made of the Fuzztones some kind of aliens during the years, somehow forcely placed close to some gothic punk bands (see the opening shows for The Damned), psychobilly (the Cramps) or half-hardly welcomed by dark genre followers (especially because of love/death/cemetery lyrics as well the black leather clothing etc).. i've often read stuff/reviews on the wave of 'the Fuzztones are not exactly for this magazine but...".. do You feel part of a minority?
Rudi: We were the first of what was referred to as "Garage Revival" bands to play NYC. We actually initiated the Garage scene there, but it was never important to me to be typecast and I never really felt the need to be part of a scene, especially if it is restricting. The 60's scene was VERY constricting - once we turned all these kids on to the music, and they began to discover the original stuff from the 60's, they became judgemental - they became PURISTS, and had the nerve to criticize us

, THE ONES WHO TURNED THEM ON TO THE MUSIC IN THE FIRST PLACE, because I'd wear leather pants, or whatever they deemed to not be "purist." Very silly stuff that I have no time for. I've always loved horror movies, Ed Roth hotrod monsters, EC comics, motorcycles... so I incorporated all that stuff into the look and sound of the band. Because we didn't actually fit in to the little narrow-minded purist scene, we actually ended up appealing to a much larger audience.
And funny thing is, now EVERY "garage" band uses Vox Phantom guitars [amazing guitars, actually!, koma's note], monster and Ed Roth imagery, all the stuff that I introduced to the genre. 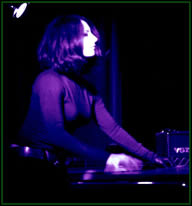 You joined the Fuzztones last year, You are the youngest member, - but notwithstanding that You already played organ for garage legend Bonniwell Music Machine.. it's like You can time travel..
Lana: yes I am the youngest member, but not the least experienced. In 2001 I was asked to play organ for the Bonniwell Music Machine in L.A. Right at the same time Rudi prepared a gig with BMM backed by the Fuzztones for New York. The gig in L.A. was great, and Rudi, who filmed the show, asked me if I'd like to be his organ grinder. You can say we met through Sean. Before joining the Fuzztones I organized and played with Robert Ampersand the first and only european BMM tour. It was a blast!People were literally crying to see their hero the legendary Sean Bonniwell! Sean is an amazing artist and has a huge stage persona. He is also a great bandleader. soon after, I went on tour with the Fuzztones. This time I was playing with another garage legend, Rudi Protrudi. I think Sean and Rudi have a lot in common, the way they write music, lead the band, and even dress. Also, both totally understand how to get to the audience. the Fuzztones are kinda a modern and more voodoo version of sixties garage bands like the Music Machine. But the main difference between Sean and Rudi is that Rudi is more "action" oriented, which rubbed off on me
as well... yeah!

koma: i found over the net a Fuzztones' single just featuring Sean Bonniwell, 'the people is me / i'm gonna make you mine', - i felt h

appy to get such a rarity.. do You have any opinion about the mp3 sharing in internet?
Rudi: I have mixed feelings. I'm glad to have the opportunity to make our stuff more accesible to the masses, but I never see any royalties from downloaded mp3's.
Then again, most of the record labels neglected to pay me my royalties too, so I guess you're fucked either way.

koma: 'Illegitimate Spawn' is a tribute album to the Fuzztones, released through Your own record label Sin records, or better, a worlwide love declaration, - and if i'm not wrong , six of these 42 bands are italian, - how did You get in touch? Do You have a pile of bands demos in Your house?
Rudi:

Well, Italy has ALWAYS been my favorite country, and a big part of that is 'cause the kids there really understand what we do, and Rock & Roll is very important to them. I've found that over the years, the best bands seem to be coming out of Italy. The band that inspired me to do the tribute album in the first place is an Italian band called Lysergic Love (they named themselves after a Fuzztones bootleg album!). They came up to me while we were on tour, and gave me a CD of them playing a bunch of our songs. A little later on in the tour Sextress, another Italian band, gave me a CD of THEM playing some of my songs. I began wondering just how many bands there might be out there who cover Fuzztones songs, so we posted a request on our website, asking bands to send us tapes of them doing Fuzztones songs. The response was amazing!!! We got so many submissions that we literally have enough material for two more double albums!
And all of the tracks are really good! Most of the bands really took it seriously and rearranged our songs in their style, and recorded really high quality versions! I'm extremely proud of this record!

You're indie! And after all these years, You still kick ass (personally i think so). but, is it true You have still difficulties to organize a tour in usa, as well to take part to a festival over there, while it seems to be easier coming in europe?
Rudi: Actually, the last, and ONLY, tour we ever did of the USA was in 1983!!! There are lots of places that are interested in having us, but no booking agency there seems to be interested in handling us. I don't know why. Europe is definitely our stomping ground!

You played some shows in italy (mea culpa, i never saw You live.. :-(), and an italian record label, Get Back! printed last year LSD25, a double album (cd+dvd), so You seem to be confortable with us..
Rudi: Well, as I said, I have a real fondness for Italy and the people. They've always treated us great! In fact, it's been a goal of mine for many years to move to Italy.

koma: why all the garage Bands (from wannabe's to seminal ones) have "The" before the name? Tradition?
Rudi: Probably. There's a lot to be said for tradition.

koma: can i be a little bit more intrusive and ask You what You when You don't play music in Your daily life?
Rudi: I usually spend the day lounging by the pool doing X with a few naked groupies.

koma: nearly last question: Rudi, do You still use a fuzz-tone/fuzzbox for Your guitar? Anyway, do You remember the first time You use it (let us dream..)?
Rudi: Yep. Hell, that's our sound, you know? I got my first fuzzbox in 1967 when I played with Rigor Mortis. You can hear it on "Bandit", our track on the Basementsville comp (on Misty Lane). It was a Heathkit. I played a plastic Hagstrom guitar at the time, going through a pre-CBS Fender Vibrolux.

koma: last but not least.. how would You introduce the Fuzztones to someone who never heard of You before? personally when i'm in office and some of my workmates ask me what music i'm playing in my headphones, my reply is 'jazz music' (to avoid to open endless discussions and/or look at me strange) (ps. i love jazz)
Rudi: For people who aren't really familiar with obscure 60's stuff, I usually tell 'em that we sound like a cross between The Doors and The Stones, two bands they might be able to identify with.

koma: a curiosity: i remember i read somewhere that once you auditioned Marky Ramone.. any memory of how it went?
Rudi: I sure do. The Lysergic Emanations line-up broke up after our big European tour in 1985. Elan and Ira quit to form their own band, the Headless Horsemen. We had an ad in the Village Voice for a drummer and guitarist, and Marky Ramone and Jeff Salen (Tuff Darts, Sparks) came down to audition. Salen was great, but he was really short, balding, and wearing a suit, so he didn't cut it. Marky looked great, and was REALLY into joining, but he was really stiff. He played every song like it was a Ramones song. He couldn't get it to SWING, like we were used to with Ira. We kept him for two weeks, trying really hard to get him to feel it in the same way that we felt it, 'cause let's face it, having him in the Fuzztones woulda been quite a coup. But he never quite got it and we ended up gettin' "Mad" Mike, who, by the way, turned the Ramones down when they asked him to replace Marky! 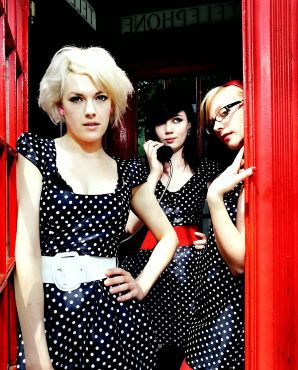 Noah Kalina - takes a photo of himself every day for 6 years Varie
Previously, on komakino fanzine, about 'The Fuzztones':